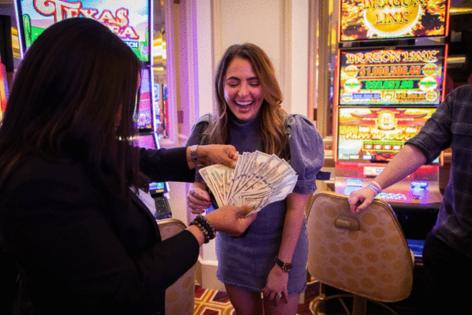 Francine Maric was inside The Venetian standing near a slot machine in the high-limit slot room, waiting for a handpay, when someone walking by recognized her.

The man whispered to his friends, and one of them tapped the shoulder of Francine’s husband, Miran, who was standing several feet away from Francine, and asked: “Is that the girl from Instagram? Do I have to pay her to take a picture with her?”

The Marics are behind the YouTube channel Lady Luck HQ, where Francine films herself playing high-limit slots and reviews hotels. The pair, who live in Atlanta, started making content on Instagram in 2018, posting photos of their trips to Las Vegas and casino jackpots. Followers suggested she film herself playing slots, so she did, and the channel quickly took off.

Now, Lady Luck HQ commands an estimated one million daily views between YouTube and Facebook. She capitalizes on it, in part, with livestreams or videos promoting games from paid partnerships.

The Marics said they could sense from the beginning that their videos could turn into a business.

The global influencer marketing industry reached $10.4 billion last year, and it’s expected to grow to $143.1 billion in 2030, at a compound annual growth rate of 33.4 percent, according to research firm Grand View Research.

And while fears of an economic recession loom, some experts say influencer marketing could grow even more during an economic downturn as businesses turn to alternative and cost-effective channels.

The Las Vegas Convention and Visitors Authority, the destination marketing organization for Las Vegas, more than tripled the number of influencers it works with in a year. Michael O’Brien, LVCVA’s senior director of digital marketing, said it went from using 26 influencers for the fiscal year 2021 to using 100 influencers this year.