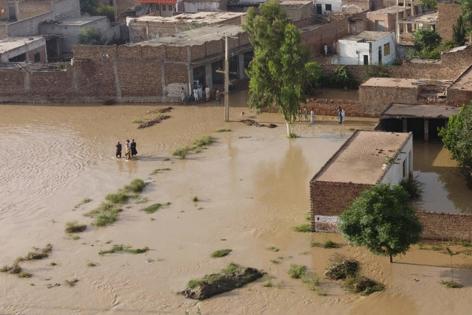 The threat of climate change conjures certain scenes: Smoke billowing from a forest aflame. Smothering heat clinging to the distorted asphalt of a densely packed street. Glaciers breaking off into a rising sea. Another scenario should be equally terrifying but is harder to envision: a virus leaving the animal that has played blind host for an encroaching human being.

For years, scientists have been warning us about an unsettling reality: that climate change will make pandemics more likely in our collective future.

Much like climate change’s effects on our environment, its effects on our health seem insidious — until they aren’t. A climate in flux brings us closer to thousands of potentially destructive viruses — a clear cause for concern, given that we are reaching nearly three years of life under COVID-19 and following the recent outbreak of monkeypox.

Changes in temperature and precipitation shift the geographical ranges of animals — including mosquitoes, ticks, birds and small mammals — into the environs of humans. Storms and floods displace people from their lands and lead them closer to animals that spread disease. That means we’ll have more and more contact with wildlife, the organisms they carry and the illnesses that ensue.

The recent flooding in Pakistan after an unprecedented monsoon season offers a stark example. The country was already seeing rises in cholera, caused by the bacterium Vibrio, which contaminates water sources. Floods have since disrupted vaccination, medical care and disease monitoring strategies essential to controlling the outbreak. Where large bodies of water stagnate, mosquitoes that harbor dengue and other viruses as well as parasites such as malaria are proliferating and transmitting them to people. The looming health crisis of waterborne diseases in Pakistan is feared to become worse in the weeks ahead.

Ebola, Lyme disease and Lassa fever have also reached humans via other species, and all three stand to circulate more widely in a warming world. But the Lassa virus, a World Health Organization-listed high-priority pathogen with the potential to cause a public health emergency, is particularly alarming because its presence in West Africa is entrenched, and its spread is climate-driven.

Amid lower rainfall conditions and longer dry seasons, the common African rat Mastomys natalensis carries the virus and has little choice but to forage for food in the dwellings of nearby humans, leaving urine and saliva on rice, cassava and other crops stored in barrels or left in the sun. When people ingest those foods or have other direct exposure it can lead to infection, typically resulting in fever and a general feeling of malaise. But it can also produce disturbing symptoms such as hemorrhaging from the eyes, nose and mouth, and even permanent hearing loss. The virus is estimated to infect nearly 500,000 people each year and claim 5,000 lives. In parts of Liberia and Sierra Leone, it accounts for more than 10% of patients admitted to hospitals every year.

As infectious diseases continue to emerge, so will efforts to quell them. The U.S. government has invested hundreds of millions of dollars in viral surveillance programs with dramatic names — DEEP VZN, STOP Spillover and the late PREDICT, to name a few. These intrepid groups of scientists root themselves deep in crucible regions of Asia, Africa and Latin America — where territories of human settlements, livestock and wild animals overlap — to gather data for modeling the pathways in which a zoonotic virus could spill over into the fragile human biome, generating a novel disease.

Such interventions can anticipate and even quicken our response to an outbreak. But no matter how sophisticated these systems might be, they don’t stop one from happening in the first place. Although this research can help us predict and theoretically contain a virus poised to jump into humans, it doesn’t address the underlying factors that ready the microbial trampoline.

That’s why our focus should turn further upstream, on climate change and mitigating its effects. Reducing emissions from the biggest culprits — such as industries in energy, transportation and healthcare — will stem the worsening of disease-friendly conditions including floods, heat waves and droughts. And minimizing our carbon footprint will reduce air pollution and lessen other impacts on the environment, raising the baseline health of our population. That could curb the chronic conditions — such as cardiovascular disease, diabetes and cancer — that made us vulnerable during the COVID-19 pandemic and make us susceptible to the next threat.

But the biggest factor that would guard against the leap of a pathogen requires rethinking how we alter our landscapes. When forests are recklessly cleared for logging, road building and conversion to croplands, we lose the biodiversity that keeps in careful balance the numbers of rats, bats and other faunae that spread zoonotic diseases. And when urban centers sprawl beyond reasonable boundaries, animal and human habitats are irrevocably bridged.

The ecological networks that bind us with our natural surroundings are clearer than ever. It’s a relationship we must honor. Failure to do so would escalate biological collisions we cannot possibly win.