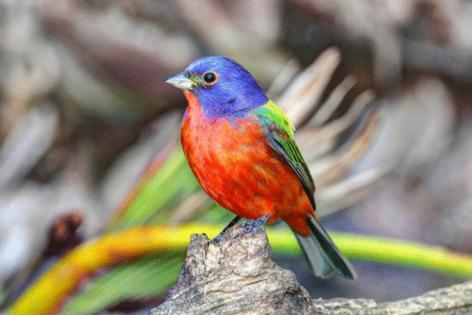 RALEIGH, N.C. — Bob Karp waited nearly three hours through a hot August Sunday for a glimpse of the painted bunting — sometimes called the most gorgeous bird in North America, with its feathers flashing red, green and blue.

And just about the time Karp had given up hope, walking back to his car at Dix Park in Raleigh, it landed right in front of him, posing, rewarding his patience.

“I only had 20 seconds to shoot,” said Karp, a Raleigh photojournalist. “It sounds corny, but you feel like you’re blessed to spend that moment and then it’s gone. He was the rock star.”

For the past few weeks, bird fans from as far as Charlotte have traveled to Dix where, just outside the sunflower field, the male bunting appears with its patchwork of feathers.

Some birders report spotting a female as well — colored yellow-green all over.

‘Such a fluke that I had to see it’

The bright-yellow goldfinch is far more common here. But the bunting, nicknamed “nonpareil” or unrivaled, warbles more in the brush around Texas, often making it to the Southeastern coast, according to Audubon.org.

“What a day! What a bird!” tweeted Brenda Hiles-Hurt. “Amid all the trouble in the world, a little splash of happiness.”

Having spent 30 years photographing all sorts of news, in New Jersey before Raleigh, Karp recalls the year New York went crazy for a mandarin duck in Central Park, which he shot along with a row of photographers.

“You’d have thought it was George Clooney,” he said.

But Raleigh’s avian celebrity feels special, he said, because it requires silence and intense listening — tuning in for the hint of a song, a flutter of wings and a fleeting visit from a winged curiosity.