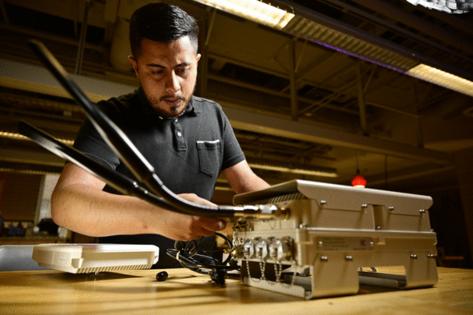 Many of the technologies now available to boost connectivity are prohibitively expensive or just not commercially viable, and the number of underserved people in the state, when it comes to broadband connectivity, is greatly understated by as much as a four-to-one ratio, according to one study last year by a consumer group.

A new Denver company, Eucast Global, is introducing “network in a box” technology from South Korea which it claims can bridge the state’s digital divide in a more affordable and robust way than other alternatives on the market, providing access to LTE and 4G cellular, internet and soon 5G services in parts of the state that have lacked it.

“You turn it on and you have instant connectivity,” said Chris Medina, one of four founding directors of the company. “We don’t have to create cell towers or dig fiber.”

The beige metal boxes, about the size of a toaster oven, require a little more work than flipping a switch. A power source is needed, and so is a broadband connection — either a fiber optic node, a link to a low-earth-orbit satellite, or a reachable cellular tower. Once a connection is established, the base stations, which have a radius of a mile to five miles depending on the terrain, can be linked together to create a much larger network.

Base stations cost around $11,000, making them a much more cost-effective alternative than digging fiber optic cable to every home in an isolated town or building new cellular towers that won’t ever pay for themselves. The units cost a fraction of what some better-known rivals like Nokia charge, and they don’t come with the national security concerns tied to lower-cost and less reliable equipment made in China.

And because the networks created are private, they are safer from hacking efforts and eavesdropping than public Wi-Fi networks, allowing them to have commercial as well as consumer uses.

Each box can handle up to 200 devices at the same time, making them an option for rural factories and large farms that are using remote sensors and robotics, Medina said. One early application of the technology will be to hook up oil and gas well sites in remote areas, providing producers with huge savings on cellular bills that can run tens of thousands of dollars a month.

A key mission of the company is to expand broadband connectivity into areas where it is severely lacking, such as on Indian reservations and rural communities, said Gary Sumihiro, CEO of Sumihiro Investments, who said he quickly realized he had to bring the technology to the United States after witnessing it at work in South Korea and Japan.

“There are 17 million kids in the U.S. who don’t have access to the Internet at home and 44% of low-income adults who have limited broadband access,” he said. Eucast may not cover that gap completely, especially in urban areas, but it could put a dent in it in rural ones.