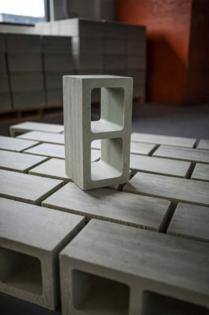 The startup Prometheus Materials recently closed an $8 million Series A financing round that included participation by the Microsoft Climate Innovation Fund and Sofinnova Partners, a European venture capital firm.

The technology is groundbreaking, but its basis has been around for billions of years, according to Loren Burnett, the company’s co-founder and CEO.

Production of what will ultimately be building materials starts with microalgae and providing them what they need to do what they do naturally: biomineralization. That’s the process of living organisms producing minerals that form structures such as shells and reefs.

What began as research by four professors at the University of Colorado in Boulder has moved to a production site in Longmont. There, the company will make bio-cement, a zero-carbon alternative to what’s called portland cement, the most common type of cement and a basic ingredient of concrete.

Concrete is one of the most widely used materials in the world, Burnett said. “And cement, which is the key component for concrete, is responsible for 7 to 8% of the Earth’s carbon dioxide emissions on an annual basis.”

The world’s building stock is projected to double by 2060 even as the need to cut greenhouse-gas emissions increases, he added. Burnett, a self-described serial entrepreneur, met with the CU professors, decided to license the technology and, with the professors, formed Prometheus Materials, the sixth company he has started.

“I realized very quickly that what they were working with had tremendous potential to have a significant impact on the Earth by decarbonizing concrete,” Burnett said.

Wil Srubar III was the lead principal researcher of the CU scientists and engineers working under a Department of Defense grant. The professors’ fields of expertise include microbiology, biochemistry, material sciences and structural engineering.

Lake Oroville, the largest reservoir in a state system that provides water to 27 million Californians, has already reached its peak level for the year, barely surpassing half of its capacity, according to the Department of...Read More

Bitcoin struggled to hold above the closely-watched $20,000 level, extending a period of marked volatility that saw huge weekend swings.

With the Colorado River’s depleted reservoirs continuing to drop to new lows, the federal government has taken the unprecedented step of telling the seven Western states that rely on the river to find ways of drastically...Read More

LOS ANGELES — A mountain lion was struck and killed by a vehicle Friday in the Santa Monica Mountains, not far from where her mother was killed in a 2018 crash, the National Park Service said.

LOS ANGELES — It was a nightmare fire season that California won’t soon forget.

As more than 9,000 wildfires raged across the landscape, a canopy of smoke shrouded much of the state and drifted as far away as Boston. ...Read More