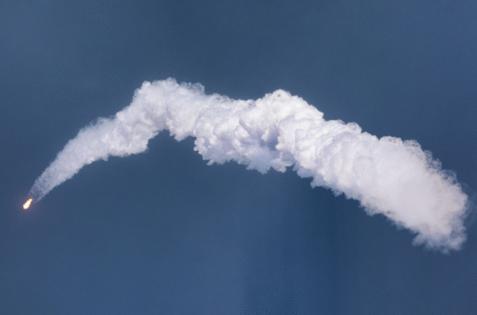 ORLANDO, Fla. — SpaceX sent up another set of Starlink satellites on a Falcon 9 launch from Cape Canaveral Space Force Station on Saturday.

The launch came one day after a successful Falcon 9 Starlink liftoff from across the country from Vandenberg Space Force Base in California as part of the company’s record pace of launches in 2022.

Liftoff occurred at 4:40 p.m. from Space Launch Complex 40. The first stage for the flight was new, the first time SpaceX hasn’t reused a booster for a Starlink flight, and the company was able to once again recover it on the droneship Just Read the Instructions in the Atlantic Ocean.

It’s the 20th launch in just 19 weeks this year with another Starlink launch targeting liftoff from Kennedy Space Center next week. It’s also a continuation of a major juggling act in the last month with the the launches and landings related to three missions with its Crew Dragon capsules.

Since the first successful Falcon 1 launch in 2008, the company has had 158 launches and 120 landings of its rockets’ first-stage boosters. It’s managed to reuse its boosters 96 times.

The brunt of recent launches have been for the Starlink constellation of satellites. To date, SpaceX has launched more than 2,400 of the 570-pound satellites on 44 previous Starlink missions flown since 2019. The company has approval to place 4,408 Starlinks into service, each of which orbit at around 341 miles altitude.

SpaceX is seeking Federal Communications Commission approval to increase its Starlink presence to about 30,000 with future launches on board its in-the-works Starship rocket.

The Starlink program at full capacity looks to provide the company billions of dollars from millions of internet subscribers across the planet and help pay for SpaceX’s missions to Mars.

This week, the world got its first-ever look at Sagittarius A*, the supermassive black hole in the center of our galaxy. The image of a hazy golden ring of superheated gas and bending light was captured by the Event ...Read More

It’s not the first time he’s fallen short, backed out or abruptly changed course after making a big, showy promise of innovation. In ...Read More

PHILADELPHIA — Clouds and showers are poised to spoil not only another weekend in the Eastern United States, they are likely to ruin one of the year’s most anticipated astronomical events — a total lunar eclipse ...Read More