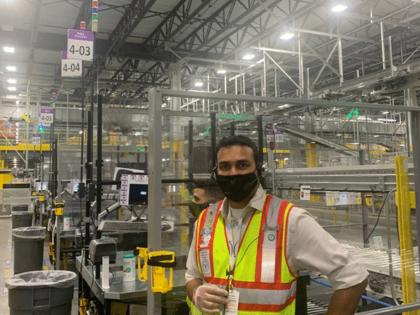 STANTON, Delaware — Amazon's biggest, newest warehouse, with more robots than ever, brings America closer to an automated future when machines do all the work of moving everything from groceries to laptops, from makers to users. And do it faster.

While Amazon has been building increasingly automated warehouses since opening its first satellite center in 1997, five miles down the road in New Castle, Delaware, this $250 million showcase is something entirely different.

Insides the five-story plant — as big as 17 football fields, or four of Philadelphia's tallest high rises — an electromechanical ballet performed by robots takes place in an eerie quiet. Robot vehicles, guided by optical and motion sensors, make turns tightly adjacent to one another, selecting and carrying Amazon's vast array of merchandise from storage to delivery.

There are still workers unloading trucks from suppliers and stowing the contents — not in vast shelves for hands to grab but in eight-foot-tall stacks of square yellow bins. Once within these, goods begin their robotic travels.

Hour after hour, tireless robots seize the stacks and move them across the vast floors, dutifully pausing before isolated checkers, flesh, and blood, who wave electronics devices to verify the orders. Finally, workers pack the sorted goods onto conveyors to carry them to loaders for delivery.

And Amazon is developing drones and self-driving vehicles to speed those last steps.

Rival shippers such as FedEx or the U.S. Postal Service, big grocery chains, and upstart deliverers such as Philadelphia's Gopuff have also been speeding up their warehouses. But Amazon's massive investment will force its competitors to invest a lot more, a lot faster, analysts predict.

About 10,000 Amazon-built robots here far outnumber the 1,000 newly hired human workers who spend 10- to 12- hour shifts at the 3.7 million-square foot complex, which Amazon contractors erected on the site of a former General Motors factory that itself drew quite a bit of publicity in its day.

Does that 10-1 ratio spell an end to the massive hiring that has made warehouse work at double the minimum wage so widely available in recent years?

Amazon and its admirers are a little sensitive on this point, so it's worth noting upfront: Amazon is still hiring, not just because so many workers don't last a year, but also because its service is so popular that it keeps building more centers, adding people to run them, doing things robots still can't. For now.