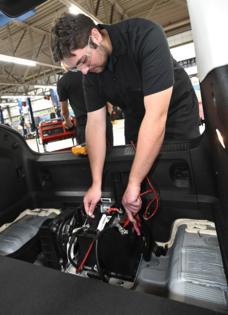 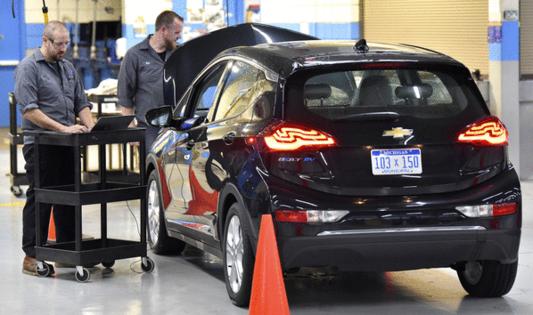 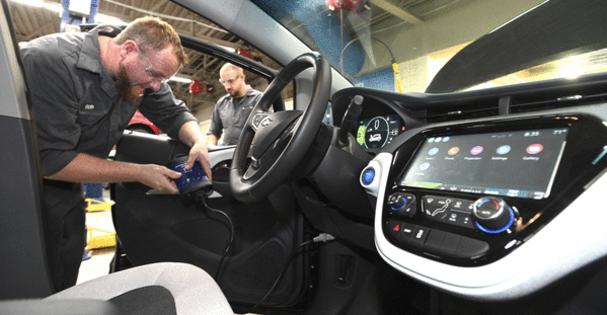 DETROIT — Greg Patton says he's not like other mechanics with more than 40 years of greasy auto repair experience because he gets the coming electric vehicle future.

In the last four decades, he's watched manufacturers work to adapt their technology for better fuel economy to the point where vehicles now shut off when stopped. There's not much else they can do, he says, to achieve better fuel economy with internal combustion engines. And that's why EVs are inevitable.

"I would say it's long overdue," said Patton while sitting down for lunch at Mack Garage in Detroit where he works mostly on internal-combustion vehicles and occasionally a gas-electric hybrid. "I just can't wait for the fully level-five autonomous cars to be coming out."

As automakers accelerate their EV plans, independent auto mechanics, dealer service centers and trade schools training future technicians are weighing how and when to best prepare for more electric vehicles to hit the road — and some harsh realities with far-reaching implications loom.

EVs require less maintenance since they have fewer parts, especially in their drivetrains. That's a concern for some shops, but others say there's still a need for even more technicians who are trained to handle high-voltage wires that could kill if not handled properly when servicing EVs.

Right now, trade schools receiving accreditation from the National Institute for Automotive Service Excellence "don't necessarily have to teach hybrid or electric," said Mike Coley, ASE Education Foundation president. "Now a lot of programs are headed that way, and curriculum is being developed to teach that."

The technology is still evolving, he added, and "right now, a lot of that training is very manufacturer-specific."

General Motors Co. — which is planning to field an emissions-free lineup by 2035 — established its Automotive Service Education Program, referred to as ASEP, in 1979. The program is a partnership with 50-plus community colleges across the United States and Canada that offer a two-year associates degree in automotive technology with a focus on repairing GM vehicles through curriculum provided by the Detroit automaker, GM's director of global dealer service and warranty operations, Michael Durkin, explained in a statement to The Detroit News. There's a GM dealership co-op as part of the program.

"We will begin introducing EV content into this existing program in the near future as GM ramps up its transition to more EVs across the GM vehicle brand portfolio," Durkin said.

Stellantis NV, maker of Ram trucks and Jeep SUVs, maintains a network of about 100 Mopar Career Automotive Program or CAP schools it is working with "to equip and implement EV training in the future as the curriculum changes," said Brian Szalk, head of technical training at the automaker's National Technical Training Center, in a statement to The News.

You don't have to leave your gate or get in line to order food at the airport anymore, thanks to "Gita," the robot that delivers.

Airline passengers can now order from McDonald's and other restaurants at Seattle-Tacoma ...Read More

A Seattle engineering company is building one of the world's first zero-emission engines for a massive mining truck in a warehouse packed with "Star Wars" memorabilia and machines named after "Saturday Night Live" ...Read More

Q: I haven't been able to send my iPhone photos to Walgreens and Walmart for printing due to a format issue — the photos were in the HEIC (High Efficiency Image Coding)file format the iPhone uses. I then saved the photos...Read More

Epic Games has asked for a higher court to review a California judge’s decision in the high-profile Epic Games v. Apple antitrust cases, filing an appeal on Sunday to the United States Court of Appeals for the Ninth ...Read More

SEATTLE — During the pandemic, restaurants around Seattle started to notice they were getting more food orders from different versions of their menus that sometimes dated as far back as 2014. Worse, when the kitchens ...Read More