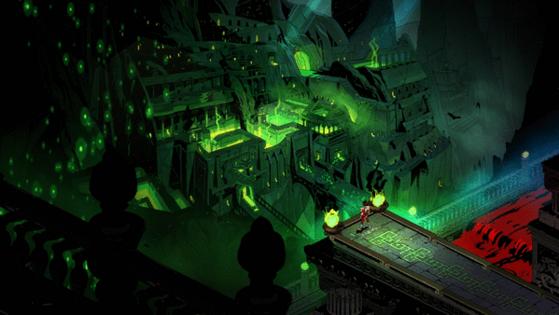 Death in video games is never good a thing. It’s a sign a failure, proof that you didn’t accomplish your objective. It forces you to redo a portion of gameplay, aiming to do better the second time around. It is not how the game is supposed to be played.

Except in "Hades," it is all part of the game. And in "Hades," the return from death is actually quite ... fun. It’s not often these days that a video game developer gets you to rethink a core tenet of gaming, but in "Hades," developer SuperGiant Games does exactly that in a uniquely fantastic dungeon crawl.

You play as Zagreus, prince of the Underworld and son of the titular Hades in a game that pops with color, personality, and subtle innovation. Your goal is to escape the Underworld, and your quest draws plenty of support from other gods. To reach your quest, you’ll have to battle through the Underworld, of course, and that’s where the fun comes in.

"Hades" plays from a classic top-down isometric perspective, and in many ways it resembles Bastion, the now-classic game that helped put SuperGiant on the map. Combat is fluid and snappy, and over the course of the game, you’ll get to build your character up as you see fit, choosing from six different weapons and a series of upgrades.

Over the course of the game, you’re also destined to fail and die — and this is part of the game. But that’s actually where the fun and wit and magic of Hades wind up occurring. Whenever you die, you’re returned to the House of Hades and greeted by your father. You’ll also find a host of other things to do in this House. You’ll talk to other gods, many of whom support your quest, and be able to give them gifts. You’ll develop bonds with them, and learn more about Zag’s own unique story. And you’ll deliver permanent upgrades to Zag in the House of Hades (these differ from some of the in-action upgrades you receive, which disappear whenever you die and return to the House).

In this way, death isn’t something to be avoided. Death becomes a moment of simultaneous misfortune and good fortune: Yes, you failed at your ultimate game goal of escape, but with each death, you get a little closer to that goal, since, in theory, you now get a chance to make Zagreus’ character better. Soon, you embrace each death as a chance to play with your character build, or experiment with a different weapon.

You also learn more about the narrative in "Hades" — and it’s a good one. There’s more intrigue to Zagreus and his relationships than you may think, and much of that story is told in the House. Speed through the conversations and try to get to the action (as I did early on in the game), and you miss this. Take your time and listen to the dialogue, and you get to appreciate the hard work SuperGiant has put into the overarching narrative.

This is a game that’s meant to be enjoyed, and it’s a triumph of gaming too that gets you rethinking the classic gameplay loop. For decades, video games have made death painful, but really, if you think about it, every time you died in "Sonic the Hedgehog" or "Super Mario," you came back armed with knowledge of how to be a bit better.

In "Hades," every death is just a chance to have more fun.

At the Jet Propulsion Laboratory in La Cañ...Read More

SAN DIEGO — She lived in England during the age of Dickens, taught school in Illinois as America expanded west, wrote for a scrappy newspaper in Detroit after the Civil War, and spent her latter years in San Diego ...Read More

“I read your article from two weeks ago about installing Malware Bytes ...Read More