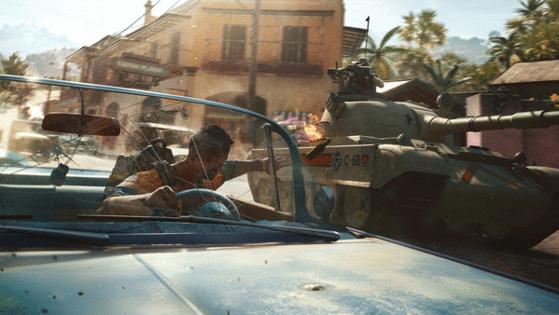 Ubisoft title will launch Oct. 7 and takes place in an nation inspired by Cuba

For a long time, Giancarlo Esposito, who starred in “The Mandalorian” and “Breaking Bad,” was the face of the first-person shooter series “Far Cry" as the dictator Antón Castillo, but a recent Ubisoft announcement detailed the role players will take in its latest installment.

“Far Cry 6” follows the exploits of Dani Rojas, a military dropout. Players can choose to make the protagonist male or female. In the trailers, Ubisoft showed a female Dani.

Dani becomes part of a guerrilla movement that tries to bring down Castillo and his army of 300,000 soldiers. Ubisoft wasn’t shy about discussing the influence for Yara, the fictional country where the game takes place. The setting is inspired by Cuba and comes complete with architecture that matches the Communist nation and the classic cars that remain on its roads. With so much similarities, why didn’t Ubisoft just set it in Cuba itself? It could perhaps be to avoid an international incident with real-life nations, which happened when the company set “Tom Clancy’s Ghost Recon Wildlands” in Bolivia. It angered the government there and the nation filed a formal complaint with France.

Because players are mostly a solo act going against a well-armed military (co-op is available), the game has a “Mercenaries” vibe to it. Players can create all sorts of chaos using what Ubisoft calls the “resolver” spirit. It’s the idea of resourcefulness and using any tool at hand as a weapon or tool. That leads players to carry a minigun powered by a motorcycle engine or donning a homing missile backpack. The preview also shows Dani driving a tank and blasting enemies with it.

From the looks of it, “Far Cry 6” could follow a path of past games. Players will build a resistance and use locales and other hide-outs as bases. It appears that players will have side quests and other activities including dominoes. They’ll also have to go stealthy sometimes by holstering their weapons when Castillo’s forces drive by. If past games are any indication, players should expect different factions and drama as the revolution ramps up.

“Far Cry 6” is notable because it seems to feature a diverse set of locales. The open-world shooter obviously takes place in a tropical jungle, but the preview also shows more urban environments, including a port full of cargo containers and capital city full of low-slung buildings and skyscraper. The different environments will push players to switch up their tactics and weapons. With this in mind, Ubisoft says “Far Cry 6” will accommodate different styles including ones focused on stealth or other combat based on a more forceful approach.

Similar to “Far Cry 5,” players will recruit companions such as Guapo, a pet crocodile owned by ex-KGB spy Juan Cortez, and Chorizo, a cute dachsund that uses a wheelchair. They can help players when their overwhelmed with foes or they can create new opportunities for attacks. One of the cooler additions is the use of horse to travel around. The beast of burden could present new gameplay opportunities.

The campaign itself looks beautiful in places. The environments that show off the shadows and long vistas look impressive. It will be interesting to see how lead developer Ubisoft Toronto will use the power of the latest consoles to make the project look better. The preview already showed hints of ray tracing with the puddles on the ground. This could be a title that lends itself to a Photo Mode.

“Far Cry 6” is scheduled for release for Oct. 7 on the Xbox Series X|S, PlayStation 5, Xbox One, PlayStation 4, Stadia, Amazon Luna and PC.

This week a reader writes in: “If I was going to look at buying a refurbished laptop, is there any simple way to determine the state of the battery? I know it is not going to be a new battery, but is there any way to ...Read More

What was supposed to be an hour or two for testing turned into a successful 12-hour cleaning project with the Dewalt 20 V MAX 550 PSI power cleaner kit.

I’ve been a power washing fan for a year, so now adding the ...Read More

If you're looking for your first smartwatch or replacing an old one, there are a lot of factors to consider when trying to figure out the best smartwatch for your needs — especially since it will probably be strapped ...Read More

It’s been nine years since the final proper "Mass Effect" game was released on the Xbox 360. It was 2012 and that game was "Mass Effect 3," the third part of a trilogy that involved you as Commander Sheperd, the ...Read More

Scientist Robin Ayou is alone on a strange planet and everything is trying to kill her. If it’s not the ...Read More