A Day on Reykjavik's Old Harbor 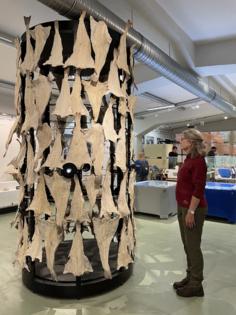 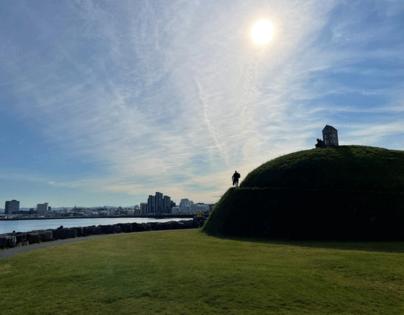 Icelandair has hatched a fantastic marketing scheme. Travelers passing through Iceland on their way to points afar can stop there for up to a week free of charge. On a recent trip to Sweden, my family opted to take advantage of the offer and see what there is to do in this northern nation. With time limited, we couldn't take it all in, but one of our unusually sunny days was spent on Reykjavik's Old Harbor.

We picked up a bagel and coffee to enjoy as we wandered to the Reykjavik Maritime Museum. A small exhibit on its first floor told the story of a recently excavated shipwreck in Icelandic waters, but the bulk of the museum's information began on the second floor, where we learned just how significant fishing has been to this island. Dozens of fish models and illustrations welcomed us into the first hall, where a small boat and interactive computers taught us about Iceland's fishing industry. In the next gallery were examples of the many tools used in fishing -- jigs, longlines, nets, trawls and purse seines -- with explanations about how they are employed. In another area, waterproof outerwear from various eras is displayed.

I had expected those types of exhibits, but as we moved on, I was moved by one that honored local sailors lost at sea and described the impact of those losses on the small communities from which they came. One shipwreck might take the life of someone from every family in town, and those communities band loyally together to try and save or find crews after such disasters.

In one room I found my sister-in-law staring at a rack of dried cod. She explained to me that her grandparents had come from Sweden and that their relatives would send them salted, dried cod just like those on display long after they had emigrated to the United States. She remembered her grandparents reconstituting the fish, boiling it and serving it with butter. It may not have been a favored dish by her generation, but it was a favored memory.

Back outside we wandered around the harbor to an art installation called Thufa by Olof Nordal. His sod-covered, 26-feet-high mound rises at the mouth of Reykjavik's Old Harbor as a reminder of peace and meditation in the midst of the city. Visitors to the Thufa can walk to a small fish-drying shed -- another nod to the Icelandic fishing industry -- on its top via a winding path that ends with an unimpeded view of the city.

By the time we had walked along the Old Harbor and delighted in the numerous jellyfish bobbing along the rocks there, we were ready for lunch. Fortunately, Kaffivagninn, the oldest operating restaurant in Iceland, was on our route. We sat in the sunshine having the lightest, freshest fish and chips I ever remember. Our taxi driver the day before had suggested we avoid salmon and trout while we were visiting because it is the white fish that is special and different in Iceland, and we were getting the message that this was true.

Heading back along the Old Harbor, we found an exhibit of information that -- again -- paid homage to Iceland's fishing industry. Situated atop concrete barriers, these signs included photos of the harbor from days of yore when piles of fish were stacked end to end or splayed flat out in the sun for drying. Factories of mostly women processed and prepared these fish prior to drying right where we stood. We imagined how different the harbor would have looked - and smelled - back then.

Just around the corner were shops full of Icelandic sweaters, hats and mittens for guests hoping to take advantage of the cozy hand-knit souvenirs. Local salts and chocolates were peddled there, too, so we gathered our trinkets and headed back for a local beer at an Old Harbor pub.

There we opened a bag of dried fish we had procured earlier at the Maritime Museum, excited to honor the past with these salty snacks. Unfortunately, times have changed. These pungent tidbits were a bit chewy at first and then reconstituted in our mouths to a very fishy taste that we could tell might be a treat for hungry families in a fishing town of old, but they didn't tempt us. They did, however, remind us how grateful we are for those who came before us and all the hardships they had endured -- and for modern-day freezers.

The stream of people who fled from Communist-controlled East Berlin during the post-World War II Cold War between the United States and the Soviet Union were seeking refuge in the West. That being ...Read More

Munich seamlessly blends both the urban flair of a vibrant metropolis and the traditional charm of an outlying town. Situated on the Isar river to the north of the Bavarian Alps, Munich is the ...Read More