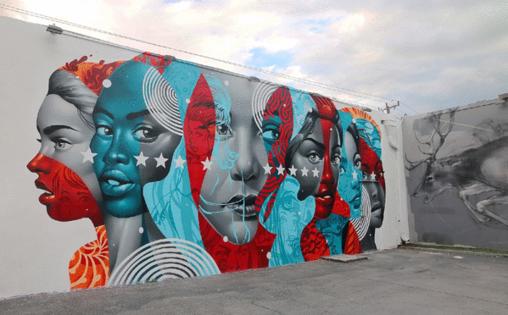 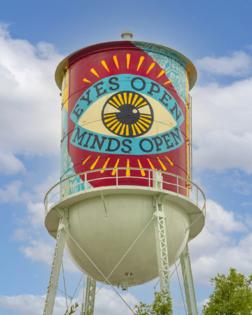 The stream of people who fled from Communist-controlled East Berlin during the post-World War II Cold War between the United States and the Soviet Union were seeking refuge in the West. That being the case, in 1961 a wall of concrete slabs and hollow blocks was erected in an effort to stem the exodus. While the side of the barricade facing East Berlin remained gray and unadorned, the other face was covered with images of peace and love. It became one of the most iconic and memorable examples of political street art.

Using illustrations posted in public traces its roots back to the first century B.C., when Roman citizens scribbled messages on brick walls. In the 1960s protesters in New York City and Philadelphia began using public graffiti to express their thoughts. Some of the most talented creators became well-known and, beginning in the 1980s, examples of graffiti and street art began to find their way into galleries and museums.

Still, the best places to view displays of this meaningful medium are where they have been positioned to catch the public's eye, attention and in many cases activism. Wherever you plan to travel, opportunities abound to view samples of this unique form of art.

Rather than gallery or museum walls, activist art is applied where it will be seen by as many people as possible. That includes the outside walls of buildings, highway bridges and overpasses, sidewalks, benches and even lampposts and telephone poles.

The materials used to make this form of art are as unconventional as where it appears. Graffiti artists began with spray paint but now also use wheat paste, stickers, knitted fibers, mosaics and even video projection. Other innovations are the soft, diffuse glow cast by LED lights and spraying paint from a fire extinguisher.

Some handiworks are part of collections that include more traditional forms of artistic expression. For example, Clarion Alley in San Francisco's Mission District is a small street whose outside building walls are covered by murals. The messages they convey change along with the issues facing the local community and the world. These range from challenges caused by gentrification of the neighborhood and support for LGBTQ rights to the plight of Palestinians. Among other political and social subjects upon which street artists focus their talents are Black Lives Matter, challenges to the environment, drug addiction, women's issues and the horrors of war.

An even more expansive collection is on display at the Wynwood Walls, an urban graffiti art museum in Miami, Florida. It uses the outsides of old warehouses as canvases on which visiting artists can express themselves. Hundreds of people representing many countries have contributed works, and along with more traditional images are messages about empowering women and saving the environment. A panel titled "Rise Above" includes portraits of the Dalai Lama and Martin Luther King Jr.

Words of King and other world-renowned spiritual and political leaders share space on large panels that line a building wall in Silver Spring, Maryland, a suburb of Washington, D.C. They're the product of a government-sponsored project that represents and celebrates the cultural diversity of members of the community.

The exhibit was created by Thomas Block, executive director of the International Human Rights Art Festival. That nonprofit organization uses artistic creativity in all of its forms to work toward a world where human rights are honored equally for everyone. It gives voice to artists from many countries, highlighting those who are oppressed because of their struggle for human rights.

Munich seamlessly blends both the urban flair of a vibrant metropolis and the traditional charm of an outlying town. Situated on the Isar river to the north of the Bavarian Alps, Munich is the ...Read More

On our quest to explore the best of the Alps we visited Garmisch-Partenkirchen, an appealing resort town nestled in the Bavarian Alps. Interestingly, this town is comprised of two separate side-by-...Read More