Visiting the Vatican on a Trip to Rome 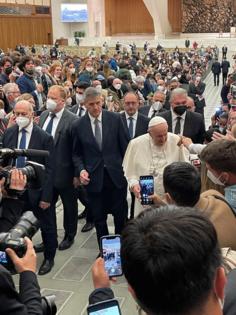 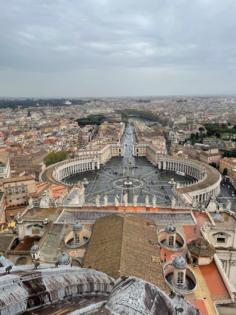 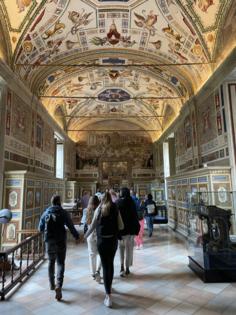 Crack! went the gavel as the auctioneer announced I had won the five-day trip to Rome for an audience with the pope and a tour of the Vatican -- completely by accident. Having always dreamed of a trip to Italy, I'd raised my hand for an opening bid far outside my budget, certain that one of the 200 Catholic philanthropists around me at the church event would increase it, but I was wrong. This trip was going to be mine. With a gulp I began to smile: Hey, I was finally going to Rome! It took a little convincing to get my husband on board, but he was willing to see this adventure through with me, so off we went.

Like most travelers in the recent past, we ran into some delays and snags courtesy of COVID-19. One of those was that I had to find my own tickets for the papal audience. After trying without success through the Vatican directly, I found the Bishops' Office for United States Visitors to the Vatican and was able to secure tickets with them. The catch was that we had to pick them up in person at 3 p.m. the day before the audience.

For travelers new to Rome, this was an adventure of its own. How often do directions include passing the Trevi Fountain? It seemed only right for us to include a gelato in that quest, too. Then, just as planned, the office door swung open at 3 and we were ushered in for a very useful orientation about the Vatican and how a papal audience works -- with an aerial photo to help with directions.

We were in line bright and early the next morning with a bag of rosaries in hand to be blessed by the pope for Catholic friends and family. And what a line it was. The Hall of the Pontifical Audiences holds up to 6,300 people, and each must be checked for security -- and COVID-19. Hawkers walked amidst the crowd selling rosaries for one euro as the queue shuffled slowly ahead.

Once inside we moved toward the middle seats, having learned that the pope usually walks the center aisle to greet the faithful at the end of his visit. And after a service read aloud in seven languages during which he blessed the audience and their religious artifacts, he did just that. The Spanish-speaking group with whom we had been seated pushed forward with the swell of people reaching toward Pope Francis, and he in turn honored us all with his blessing. It was an experience to be appreciated -- even for non-Catholics.

We had time for a coffee before we met Giovanni D'Anna, the guide I had secured for our tour of St. Peter's Basilica after COVID-19 issues cancelled the one I'd "won" in the auction. It had turned drizzly, so it was nice to step inside the massive cathedral and learn about its details and history. D'Anna was able to explain the meaning behind the huge and imposing works of art around us.

The building in which we stood, it turns out, was built on the ruins of the very Circus of Nero where St. Peter was crucified upside down by Emperor Nero after the Great Fire of Rome in A.D. 64. The first basilica was built by Constantine 300 years later, and the current structure was begun in 1506. It took more than 100 years to complete and enlisted input from artists such as Bernini and Michelangelo.

D'Anna insisted that we must try to walk to the top of St. Peter's Dome on tiny winding stairs to see the best view of Rome, and he wasn't wrong. From there we could again feel the massive size and strength of the building beneath us. But for those who chose to stay below, he stayed to visit as a good host would.

We toured the Vatican Museums another day and again found ourselves in awe of the religious power that had created the world's smallest independent nation-state. Some 1,400 museum rooms hold treasures gathered by centuries of religious leaders. It takes a long time to digest this, and there are thousands of people who want to be there, too. It was overwhelming to be in the Sistine Chapel with hundreds of people being told to stay silent and not take photos. And it felt confusing to find our way out. The best plan is to enlist an expert guide to select the best possible entry time and provide a tour that is personalized and private. Any other plan is simply too overwhelming.