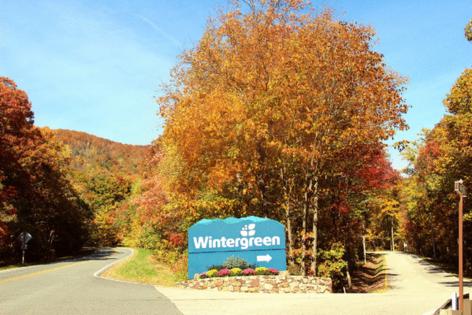 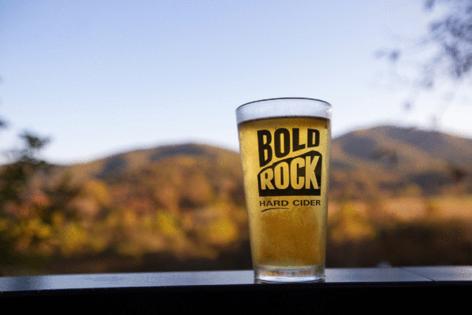 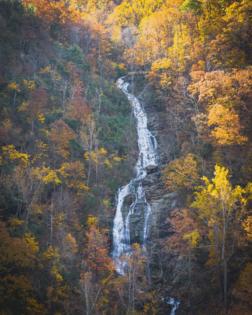 Virginia's Blue Ridge Mountains dazzle in fall. The hillsides billow with ribbons of red, yellow and rust-colored leaves, and roads lead past fields edged by fiery crimson and bright orange thickets of trees. To explore Nelson County, Virginia, we based ourselves at the Wintergreen Resort, a ski resort that sprawls on nearly 11,000 acres. The resort's Blue Ridge Express chairlift offers seasonal rides for visitors to take in the breathtaking fall colors, and they can wander among gold and crimson trees on woodland trails that lead to babbling streams and ridgetop overlooks.

The enticing peaks of Virginia, however, have equally beguiling valleys, and that is where we explored. We discovered award-winning craft breweries, cideries, a meadery and plenty of interesting and delicious cuisine at every price point.

We began our trip with a hike to Crabtree Falls in George Washington National Forest. Plunging 1,200 feet, Crabtree is the highest vertical-drop cascading waterfall east of the Mississippi River, tumbling in a series of cascades. Our first glimpse of a small ripple came after a 700-foot walk along a paved path that makes the falls easy viewing for families with kids in strollers. After that, we hiked dirt switchbacks and climbed steep stairs to reach the waterfall's top with its rewarding view of distant mountain peaks and a lush and colorful valley.

Afterward, we took a friend's suggestion to stop at Mac's Country Store in Roseland to satisfy our well-earned hunger with crispy fried chicken and big potato wedges and quickly learned why the store is legendary with locals. Another gem we uncovered was the Brewing Tree Beer Co. and Scratch Kitchen in Afton. Originally opened as a retirement project in 2018 by Mark and Gina Thompson, the family-friendly craft brewery offers outside dining on picnic tables that offer convenient proximity to a sandbox where little ones can play and a meadow where teens can throw Frisbees beside a creek.

Mark, a craft-beer guru, gained his experience at the helm of previous brewery engagements in Oregon and Colorado. Gina's experience is rooted in a culinary arts degree and includes time as a certified sommelier. Her food trailer produces creative culinary delights that are all made from scratch, and they are the perfect complements to Mark's brews that are only available on-site.

After an easy hike the following day we drove down the mountain to lunch at Devils Backbone Brewery's Basecamp Brewpub and Meadows in Roseland. Begun in 2007 as a craft brewery known for its lagers, the company now sits on a 92-acre complex that features a rotating selection of 48 different taps, a distillery, a concert stage, horseback tours, a campground and rental houses. Anheuser-Busch acquired Devils Backbone in 2016 but has not changed the energy of this Virginia brewery where an award-winning Vienna lager with its touch of sweetness still wows when paired with Vienna-lager-battered fish and chips on a patio with views of the surrounding meadows and mountains.

Later we visited Dickie Bros. Orchard in Afton, where we were too early to pick apples -- October is prime season. Instead, we purchased Paula reds, the tart first of the season's crop of up to 20 varieties. The orchard, part of a 1752 land grant to James Dickie, is farmed by the ninth generation of the Dickie family, who have expanded the property by hundreds of acres. In October families pick apples and pumpkins on Saturdays and Sundays, but the orchard also grows stone fruits and berries for enthusiastic visitors.

We had hoped to pick our blackberries at Hill Top Berry Farm & Winery in Nellysford, but a dry summer had shriveled their crop and foiled our plans. Instead, we enjoyed fruit wines and meads -- a hobby-turned-business that Gregory and Kimberly Pugh operate on their hilltop. I especially enjoyed the meads as a former English professor who first encountered references to mead, made from fermented honey, in Greek and medieval literature. The Pounding Branch Persimmon, light with a touch of sweetness, and Hunter's Moon, dubbed "pumpkin pie in a glass," were also delicious.

Before heading back to Wintergreen, we stopped in Nellysford for a taste of locally pressed Honeycrisp Cider at Bold Rock, an award-winning cidery that lays claim to being the largest independently owned cidery in the United States. With locations at both ends of the Blue Ridge Mountains, the company makes the best of local apples and blackberries in its ciders. They also craft hard teas, lemonades and seltzers that sparkle on a late fall afternoon.