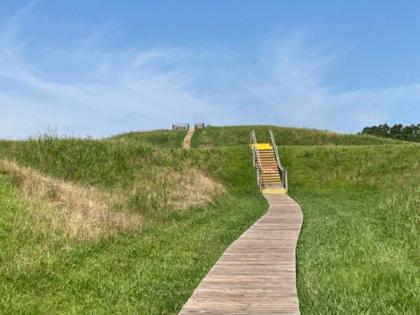 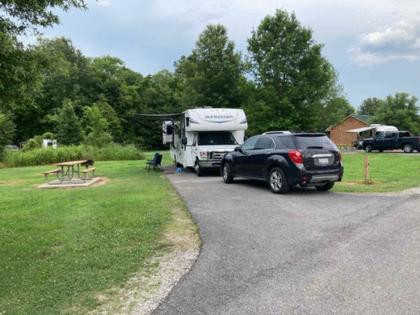 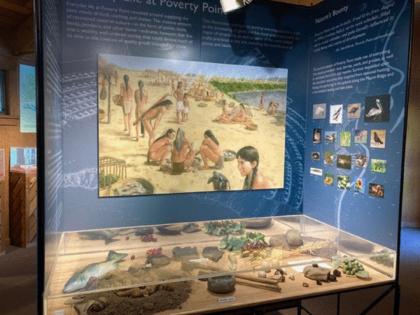 The name may not sound inviting, but Poverty Point State RV Park at the Louisiana State Park and Reservoir in Delhi is one of the most beautiful we have ever seen. The name comes from the abandoned 1800s plantation that was on this property long before it became a park. All the RV sites are flat, paved and with full hookups, and the price is nominal. Trees and good gravel trails through the deep woods surround the RV park.

Next to the RV park is the Poverty Point Reservoir with a huge lake, boat marina and cabins to rent. Some are on the bayou and some on stilts along the shore, so you can fish right off your private boardwalk. In the early summer, we found it lush, green and perfectly clean and manicured, although the weather was hot and humid. The children's playground has safety in mind with rubber mats beneath swings and slide, and the visitors center has a sturdy fishing pier and small pond for fishing.

A few miles beyond the reservoir are Black Bear Golf Course and Lodge with lovely hotel rooms, swimming pool and tennis court. When you get hungry, the Black Bear Bistro is the place to go.

This is an ideal holiday place, as it has lots of activities for any recreational interest. It is a birdwatcher's paradise with many migratory flocks along with resident ones, and the thick woods hide many varieties of animals, including black bears, deer, snakes, lizards, and other reptiles and amphibians. Visitors are instructed not to feed animals in the natural habitat, especially the mammals, as they can start craving human food and begin to invade campsites. Guided hikes are on offer, as are demonstrations of earth ovens and spear throwing. We also saw reward signs for the Jesse James gang, who hid out in this area in the late 1800s.

About 11 miles from the RV park are the famous five mounds of Poverty Point, the oldest and largest in North America and most of the world. Archeologists have determined that the earliest civilizations to inhabit the surrounding area date back to perhaps 10,000 B.C., and the Poverty Point mounds are from 2,000 B.C. to A.D. 1.

The mounds here are not burial sites, and no absolute determination as to the purpose and use of them has yet been determined. However, magnetic imaging has determined much accurate data, including the fact that 50 million cubic feet of dirt were hand-carried in baskets or animal skins (weighing 100 pounds each), equaling 100 million tons of dirt, to construct Mound A, 72 feet high and shaped like an enormous bird. Nomads settled here for centuries. Three of the five mounds are in perfectly true north-south alignment, which was certainly no accident.

The park has preserved tall native grass in semicircular rows to indicate the lines in which it is believed the houses were built in a sort of amphitheater pattern facing the very large plaza meeting area. This was the largest city and survived the longest of any of the ancient historic sites in North America. Archeologists have determined that this was a hunter-gatherer civilization because no planting was done. People lived off the local natural habitat, hunting and fishing and gathering edible plants, berries and nuts.

Many primitive art objects and tools made of stones have been found at the Poverty Point mounds area, even though no stones were native to the local surroundings. It was determined that this was a huge trade center with people coming hundreds of miles, often along waterways, and stones were a highly prized item for which these ancient locals traded. No burial sites have been found, lending to the conclusion that open-air, above-ground burials were away from the living area or bodies were committed to the water of bayous and rivers nearby.

The film at the Poverty Point Museum is informative, and exhibits include paintings above cases of archeological finds that depict the life of this ancient civilization. It is still a mystery why the mounds were abandoned about 1100 B.C.