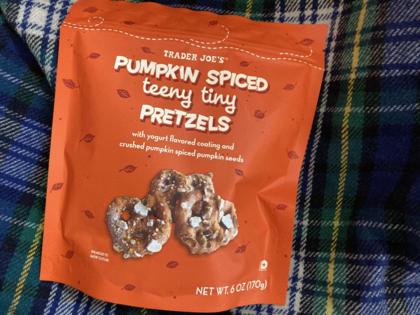 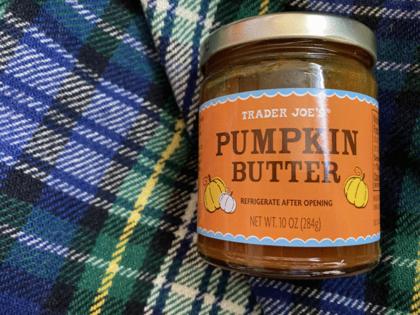 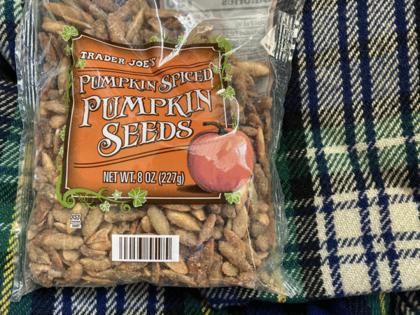 Me, my family — for us, it’s all pumpkin, all season. We shall take sustenance from the great pumpkin lord, today, tomorrow. Every meal will center around nature’s sacred orange gourd. I explained this to my 5-year-old: From here on, or at least through the Super Bowl, we will eat pumpkin products from Trader Joe’s. Pasta, hummus, breakfast bars, bread, tortilla chips — all pumpkin. This is the way it must be.

She didn’t take it too well. But she will learn to adapt.

Even pumpkin people once scrunched their faces at pumpkin bagels. She’ll see. Someday, should we move into a post-pumpkin future, we will have to explain: There was a time, long ago, when people greeted autumn by descending on Trader Joe’s, buying too many pumpkin products and convincing themselves they wanted to eat pumpkin-flavored meals 24/7. But I expect telling the great-grandchildren we didn’t always eat this much pumpkin will be like saying power windows weren’t always standard in cars. The imagination can grasp only so much.

For now, we are living in the age of peak pumpkin.

Anyone who shops at Trader Joe’s can confirm: Starbucks revolutionized the hot pumpkin drink, but Trader Joe’s weaponized pumpkin as an all-purpose 21st century meal. If you weren’t already aware of the alarm on Twitter — where users have renamed the store “Ground Zero for the Pumpkin Spice Industrial Complex” and even suggested renaming fall “Pumpkin Everything at Trader Joe’s Season” — a visit to the chain will floor you. I had no idea. I don’t shop at Trader Joe’s. But once there, like a Black Friday zombie, I fast realized how many pumpkin products I actually needed in my life.

I loaded a cart and apologized to the man at the register, embarrassed at the explosion of orange packaging and illustrations of falling leaves laid before him. He said, oh, this is nothing — people come in all the time and decide right then to get two, three dozen pumpkin items.

What follows is not for indiscriminating pumpkin people.

It’s more for the pumpkin curious. It’s also not everything pumpkin at Trader Joe’s — I sidestepped the pumpkin-based baking mixes, teas, a few beverages, some other stuff. Instead, this is a ranking of Trader Joe’s pumpkin items that offer that fast pumpkin fix, from best to very worst.

Before we begin, note that pumpkin is not that remarkable an ingredient. It’s in Indian food, Mexican food (pepitas are pumpkin seeds); when I return home to New England, baked macaroni in pumpkin in my comfort go-to. These baked pockets capture that reliability. Crispy, a bit flaky, with a pleasant heat (not overwhelming), touch of fennel, decent chunks of pumpkin, mild and earthy. Start here. $3.99

Obvious as it sounds, “pumpkin puree” — as opposed to, say, “pumpkin pie-flavored coating” — seems to be the secret of the best pumpkin stuff here. Light, finger-sized, with a creamy mellow and fleetingly scented pumpkin vibe. Subtle. $3.99

In a perfect world, here is the pinnacle of comforts: a refrigerated, gas station-esque burrito, with chocolaty pumpkin mole. Alas, this is not a perfect world. Yet it works, even though the pumpkin is more hinted than tasted. Sweet potatoes come in chunks. Turkey makes for a nice change from the usual chicken. Handful of jalapenos. It takes just like food. And sometimes that’s all you want. $3.99

More like, pumpkin-ish. The “rich pumpkin flavor” claim on the box is wrong, but “delightful holiday oatmeal” is spot on. Plenty of nutmeg. $3.49

“Finished with brown butter and sage,” reads the container. It’s mild, yet kind of lovely. Strings of butternut squash throughout. If you heated up a few containers and told friends you made it, no one would blink twice. $3.99

They suggest serving over rice or noodles. We tried tofu, which worked nicely. But it’s better Brit-style, over french fries. A little lemon in there, some coconut, a touch of garlic. Another good “homemade” dinner to lie about. $2.99

A respectable, nearly refreshing supermarket bread. Could use more swirls of brown sugar and cinnamon (and more pumpkin taste), but the cut is thick and ideal for French toast. Naturally, it springs to life after a light toasting. $3.99

I expected to hate this. It came out of the microwave (I was being lazy) and looked like a pool of cheese and some waning macaroni tubes. But the flavors mix well: the Gouda and Parmesan blend with a squash puree into a surprisingly nice comfort dish with bite. $2.99

What should be a ridiculous sign of the apocalypse is, in practice, a very smart (though extremely sugary and addicting) salad topping. For best results, place on a shelf beyond your reach and eat a carrot, you slob. $2.99

According to the company, this spread is made in small batches in Portugal. Basically, marmalade but with a light pumpkin flavor. Good with cheese. Bonus points for cute packaging (twee fabric-covered lid, faux-wooden cap). $2.99

The color of an old dog. Pumpkin taste is strong without being cloying. I flinched, then ate most of a bag. Which is also how I approach pumpkin beer. $1.99

Sort of like their butternut squash soup but thicker, richer, with a welcome, tangy dash of tahini, yet still, somehow, more timidly serviceable than it should be. $3.99

This Pumpkin Walks into a Bar Cereal Bar

Fig bars, but with pumpkin. Slightly artificial, fragrant and oaty. You imagine someone in the corporate office naming pumpkin items all day and getting punchy and needing to go home. Still, perfectly fine. $1.99

A respectable appetizer to throw on the table if people are over. Partly because it’s so rich, and so easily crumbles, it smacks of mediocre homemade dinner. $3.99

Made with dehydrated squash that doesn’t register strongly. Adorable little pumpkin-shaped macaronis. Fun for the kids, novelty for everyone else. $2.29

One of the things I hate about Trader Joe’s is that social media loves to be obsessed over totally ordinary foods they bought there. Exhibit A: Pumpkin waffles. I went three times before they had these in stock — they go fast. They’re also just frozen waffles. Some pumpkin. (Now the Sweet Belgian Waffles at Whole Foods, those are Insta-worthy.) $1.99

For those too tired to twirl noodles onto a fork? Tiny portions, decent-sized cubes of squash. But pretty dull. $3.99

Too watery to be confused with the real thing. (Come on, TJ’s, this is the Midwest. You can find better at any roadside grocery across Illinois.) A reliance on honey to liven this up was welcome. Just wished they had named it something else. $2.29

Chocolate-covered “with a pumpkin spice blend.” Tastes like potpourri. And yes, I know what potpourri tastes like. (Don’t ask me why.) $0.99

Made with “pumpkin pie spice bits.” This didn’t have to happen. This country has been through a lot in the past four years. The nicest thing I can think to say is it’s an OK bagel when it’s not as squishy (and therefore stale) and you’re starving. $2.69

The problem with Trader Joe’s pumpkin-palooza is, once you move beyond the good stuff, the drop-off is steep. This one made me sad. Never mind the yogurt coating that fights off any chance of tasting pumpkin — there’s so much going on here you can feel the bigwigs demanding: More ideas! More! $2.99

This one feels unforgivable, unnecessary. The garbanzo is in there, but buried beneath what tastes like the filling of a mediocre pumpkin pie. It’s really just dessert, and that was exactly the idea. (They also offer a chocolate hummus.) $2.49

A shopper beside me said she would sell her grandmother for these. Guess times are tough all around. These are the cookies at the Christmas party that the two stupidest people eat. “Yogurt coating.” Ew. $3.29

The dough for this rejiggered cinnamon roll is good; a little clove lends the right variety. But together with the icing, it’s cloying, delivering only a faint pumpkin feel. You never forget how processed this seems. (Pro tip: Skip the icing and it’s not so bad.) $3.99

Creme cookies with artificial-tasting pumpkin flavor that leaves the mouth waxy and unsettled and forces the brain to rethink your life choices. (My mother-in-law spit hers into the trash, gasped and asked: “Is that even pumpkin orange?”) $2.49

Generously priced. Made with 20% pumpkin puree. But whoa, is that overwhelming. “Wayyyyyyy too rich,” said my 5-year-old, who I didn’t think knew the word “rich,” but then, some experiences just define themselves. $3.99

My wife and I looked at each other and said, nearly in unison, “Chef Boyardee.” According to the label, the sauce is made in Italy, but I assure you, Italy makes crap too. If there’s an upside here, that Boyardee-like smell will bring you back. $3.49

The shell is negligible, and though the packaging promises a “delicately spiced” interior, I tasted straight-up, nuclear-sweetened, richer-than-rich pumpkin pie filling; a hand pastry without a single dimension and one big taste — pumpkin.

With everyone concentrating on the gifts they plan to give others at this time of the year, we often overlook the smallest of gifts that are always received warmly.

I’m talking about cookies. The holiday season is ...Read More

This crispy-on-the-bottom-and-chewy-on-the-inside gluten-free cookie recipe is a twist on a traditional Italian holiday treat, pignoli, or pine nut cookies. Look for almond paste — a mixture of ground almonds and sugar (...Read More

No matter what time of year it is, I am always up for a grilled steak. If it’s too cold outdoors, you can use a seasoned iron skillet on high heat for a successful result. For years, I used seasoned compound butters to ...Read More

Eating healthy has never been so easy — or so quick! A multi-cooker makes cooking a healthy meal accessible and approachable, and takes less time and energy than not-so-healthy fast-food runs or tossing a frozen pizza ...Read More

Kary Osmond will not file a recipe this week.

If you’re someone who loves all things cinnamon, these muffins were made for you. They bake up soft and fluffy, and pack in not one or two, but three doses of cinnamon. You’ll find it mixed into the batter, as a ...Read More