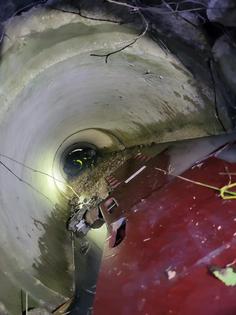 (UPI) Firefighters in Ohio came to the rescue of a man who got his leg stuck in the steel grate of a storm drain cover while attempting to rescue a cat.

The Fayetteville Fire Department said in a Facebook post that crews responded Sunday evening when a man's leg became stuck in the steel grate of a storm drain cover along U.S. 52, near the intersection with CR-120.

The man told firefighters he became stuck while trying to rescue a cat that appeared to have been injured by a car.

The firefighters used hydraulic extrication tools to expand the gap between the bars of the grate so the man could pull his leg free.

"After freeing the victim, crews immediately went to work on rescuing the animal, putting their confined space rescue training to work and inched approximately 40 feet into the culvert and ushered the injured animal to safety," the post said.

Did you know that in the winter, things like heating devices and candles cause one in six reported home fires? An estimated 500,000 pets a year are affected by home fires every year, nearly 1,000 of which are ...Read More

(UPI) A German dog trainer earned a Guinness World Record with his team of talented canines when 14 performing pooches formed a conga line.

Wolfgang Lauenburger earned the record for most dogs in a conga line when his 14 ...Read More

LOS ANGELES — Since P-22's death in December, the most famous mountain lion in Los Angeles has been honored with roadside tributes, half a dozen murals and an upcoming celebration of life in Griffith Park is expected to ...Read More

(UPI) An animal shelter in Hamilton, Ohio, is holding a unique fundraiser as a lead-up to Valentine's Day.

The Animal Friends Humane Society said Wednesday it will name a cat litter box after an ex romantic partner.

Guinness said in a statement Thursday that the Portugese dog took the record from a 23-year-old dog named Spike ...Read More

ATLANTA — The plea was urgent. And dire: The Dekalb County Animal Shelter was packed with unwanted dogs. Historically overcrowded. If the public didn’t adopt some, like 150 by month’s end, animals would be euthanized...Read More