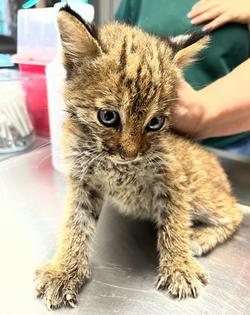 (UPI) A Tennessee animal rescue group said a couple who brought in a kitten they found on their back deck were shocked to learn the animal was a baby bobcat.

True Rescue in Mount Juliet said in a Facebook post that a couple came in on Friday with a kitten that ran up to the humans on the back deck of their home.

The couple sought "emergency placement" for the homeless kitten, the rescue group said.

The rescue said the couple were surprised when rescue staff told them the animal they had was a bobcat kitten.

"A half an hour later, and off he went to our friends at Walden's Puddle with one of our volunteers. Never a dull moment at True Rescue," the post said.

(UPI) Hundreds of corgis and thousands of dog-loving humans gathered on a San Francisco beach for the first Corgi Con since the start of the COVID-19 pandemic.

With summertime comes beach days. With a little extra planning, your canine pals can join the summertime fun.

To ensure dog owners have the best beach experience possible with their pup friends, the American Kennel ...Read More

(UPI) Authorities in Virginia rescued a kitten from a storm drain using a catch pole and a cellphone that lured the feline out by playing cat sounds.

(UPI) An adult Bengal tiger sparked fear and fascination in a Mexican city when it was seen wandering loose on a sidewalk in a residential area.