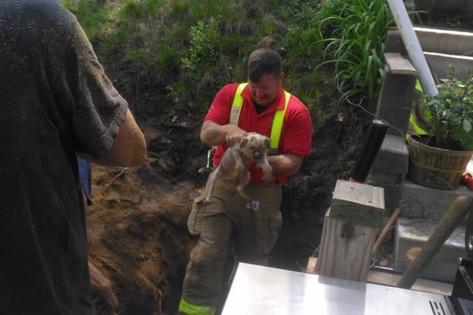 (UPI) Firefighters in Massachusetts came to the rescue of a dog that fell into an underground animal burrow and ended up trapped overnight.

The Plymouth Fire Department said crews from West Plymouth Station responded to a home about 8:45 p.m. on a report of a dog that fell into a hole on its owner's property.

The firefighters discovered the dog, a small Yorkshire terrier, was trapped in an animal burrow beneath the home's deck and concrete stairs.

"The stairs were set into the side of a hill, and the burrow had a 3- to 4-foot tunnel entrance that led to a large cavity," the fire department said in a release.

The firefighters, who could hear the dog making noises, attempted to dig into the burrow by hand and use a broom handle to widen the opening. The rescue became more complicated when they hit a concrete wall.

The rescue was called off for the night to prevent accidental injury to the canine, and crews returned at 10 a.m. the next morning. They could still hear the dog inside the hole.

"With assistance from bystanders the entrance to the burrow was secured and crews dug further, eventually finding the dog and pulling him out," the department said.

The Yorkie, named Brownie, was checked out by a veterinarian and is doing well after the rescue, the department wrote.

(UPI) Firefighters in Colorado rescued a dog trapped in the tall reeds of a lake the morning after rescuing three people who unsuccessfully attempted to reach the canine.