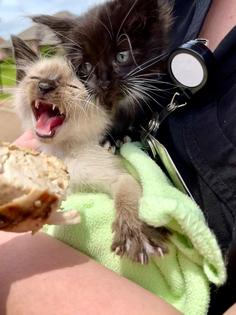 (UPI) Animal rescuers in Mississippi came to the assistance of two kittens found trapped in a storm sewer.

The Animal Rescue Fund of Mississippi said a woman contacted the organization to report she had heard a kitten crying from help from deep inside a Gluckstadt storm sewer.

The rescue fund's Elizabeth "Pippa" Jackson responded along with another rescuer, and they removed the manhole cover to reveal what the organization described in a Facebook post as two mad, cold, wet and hungry kittens.

The rescuers sought assistance from neighbors, and were able to obtain a ladder long enough for Jackson to climb down into the hole to reach the kittens 12 feet under the road.

"Eventually, Pippa got down to where the kits were, and dang if one didn't just roll right off the storm drain culvert and went plop into the water and ran down the drain to the east," the post said.

Jackson followed the kitten a short way down the tunnel, and the feline had a "change of heart" and came back to the rescuer.

The rescue fund said the kittens soon will be available for adoption.

(UPI) Firefighters in Colorado rescued a dog trapped in the tall reeds of a lake the morning after rescuing three people who unsuccessfully attempted to reach the canine.