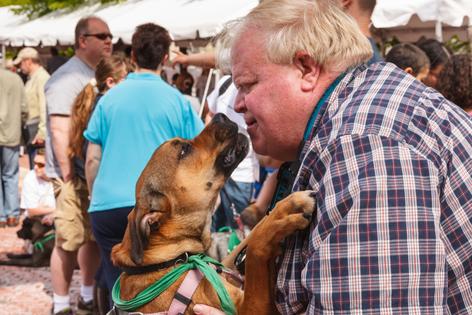 Dear Amy: I am a 74-year-old retired man. Over the course of my lifetime, I have had five or six dogs.

I live alone and my last dog died about a year and a half ago.

I've debated getting another dog for several months.

I preferred a dog that was a tad older, however, these dogs are hard to come by.

So after reading an article saying that it's a great idea for a senior person to get a pet, I broke down and purchased a five-month-old golden retriever puppy.

"Daisy" is a great dog. She has changed my life by making me more responsible. I am getting up earlier (I found myself getting very lazy), and I'm walking her six to seven times daily, feeding her, playing with her, etc.

What has taken me aback are the number of people who have said, "You do realize that this dog may outlive you?"

Yes, I knew that this was a possibility going in, but my lady friend is eight years younger than I and would take Daisy in a heartbeat.

My son is also a dog lover and has said that he would gladly take her.

I guess what shocks me is the negativity so many of my acquaintances have shown since I brought Daisy into my home.

Dear Second Thoughts: Before I heap praise onto your healthy and laudable choice to get an animal companion, I have a bone to pick: With an estimated 6 to 8 million dogs living in shelters throughout this country, no one should purchase a puppy -- especially you, because -- according to you -- you didn't want one!

Older dogs are not readily available. These days using online tools, finding a good fit between human and pet is easier than ever. The website for the ASPCA (ASPCA.org) offers an endless roster of adoptable cutie pies, searchable by ZIP code!

It is rude for anyone to speculate about your longevity in contrast to your dog's -- and yet you could assume that people are sincerely trying to ask if you have a plan for your pet, should something happen to you.

And your answer is: "Are you wondering what might happen to 'Daisy' if something happens to me? Well, I've got it all figured out. Thanks!"

Dear Amy: I am a woman with a male best friend. We can talk about anything.

I moved recently. He has said to me numerous times that he wants to see my place and that we would hang out.

My issue is that he will ghost me -- like literally ignore me -- when I ask him when he's coming over. I've asked him if I am doing or have done anything to make him feel uncomfortable. He says no, but then he'll play this game of, "We're going to hang," and then completely shut down.

I've stopped asking, but recently he brought it up again. Then he ignored my message when I followed up.

I feel like we should be able to be honest adults and he should just tell me what's going on. Maybe he has a girlfriend and doesn't feel comfortable, or maybe I get on his nerves. But his behavior seems so disrespectful.

Dear Bothered: First, you should redefine what you consider a "best friend." The best, closest, most intimate friends don't make empty promises. Best friends are reliable. They tell one another the truth. Best friends also read one another well, and understand and forgive one another's quirks.

Your friend is never going to come over. His real reasons could range from something as serious as: he's on the run from a ruthless band of assassins, or he's married or has a girlfriend he hasn't told you about -- to something as trivial as he doesn't like the smell of your cat or your cooking.

It sounds like you are dangling "best friend" status over this relationship, but you may believe you are closer friends than he does. That's something for you to work on.

Dear Amy: Thank you for urging people -- through an abundance of caution -- to never, ever share photos or videos of their naked children. On the same day I read this in your column, I saw a very disturbing news item about pedophiles collecting these home movies which had been posted on YouTube.

Dear Concerned: This caution should also extend to wherever family photos are stored.

(UPI) A 1-year-old dog born without rear paws is now learning to walk in Florida with a set of custom-made prosthetic legs and paws.

(UPI) Police and animal rescuers in New York came to the assistance of a kitten that fell 20 feet down into a storm drain.