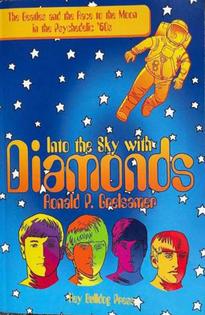 Introduced on its title page as “An historical, fictional autobiography,” "Into the Sky With Diamonds: The Beatles and the Race to the Moon in the Psychedelic ’60s" by Ronald Grelsamer will be a wild ride of memories and flashbacks for readers who lived through the era — or a detailed and thorough history lesson for those who are too young to remember. Either way, it is an engrossing combination of fact and fiction that recently won an AudioFile Earphones Award for its audiobook version narrated by the “adept mimicry, fine pacing and personal style” of Graham Halstead.

Our fictional narrator is Robert “Dutch” Richtman, the man in charge of tracking U.S. rockets and satellites for NASA, a challenging undertaking back then, which involved manning a string of stations around the globe along the trajectory of space capsules. Dutch loves his work; he’s immersed in it. It’s his whole world, crowding out everything else on this earth — except for music. He loves music.

A chance meeting on a bus, an unlikely conversation with a stranger about Druids and extraterrestrials, and Dutch has become friends with a rock ‘n roll roadie named Mal Evans. They correspond for years, and Mal’s letters about John, Paul, George and Ringo make up a good portion of the book.

Nasa’s space race and the Beatles’ rise to stardom

Though Dutch is fiction, Mal is not. Mal Evans was part of the Beatles’ road crew and a confidant, indispensable but invisible. What follows is a fascinating juxtaposition of NASA’s space race and the Fab Four’s meteoric rise to fame.

Grelsamer, who is an orthopedic surgeon at Mount Sinai in New York City, is a passionate collector of Beatles and Space memorabilia with an insider’s knowledge of NASA’s feverish efforts to beat Russia to the moon. Encouraged by friends and family, he has produced a remarkable collection of history-making events embedded in an immensely readable tale.

“Those were heady days,” he writes. “The Race to the Moon. The Beatles. James Bond. Viet Nam. Hippies. Nixon. Drugs. The Rolling Stones. Race riots. The Pill. Jimi Hendrix at Woodstock. The Kennedy assassination. Then another assassination. Then yet another.” And it’s all here, interspersed with Dutch’s love story, UFOs, tragedies in space and on the ground.

Lots to learn, even for those who remember the 60s

Grelsamer wisely alternates the narrative between the intimate knowledge and details of the progress (and failures) of NASA’s scientists, engineers and Apollo astronauts — and the gossipy, bumpy stories of the music industry. The NASA chapters are thick with statistics, scientific terms, and historical drama; Mal’s contributions are lighter, filled with gossip, lyrics, love affairs and the repercussions of fame. The combination works.

Even readers who vividly remember headlines and newscasts, AM radio and the Ed Sullivan Show will learn something new — some behind-the-scenes detail that colored opinion or determined some outcome.

"Into the Sky With Diamonds" is a book of stories: Mal’s recounting of the creation of Beatlemania, Dutch and Sally’s relationship, the wives and girlfriends of the Beatles, outer space, patriotism, technology, fear, accomplishment and calamity. After finishing the book, readers may want to listen to the album "Let It Be" a few times, and then fire up Netflix and watch "Apollo 13" — or, if you time it right, the new three-part Peter Jackson documentary "The Beatles: Get Back," which premieres on Disney+ beginning November 25.