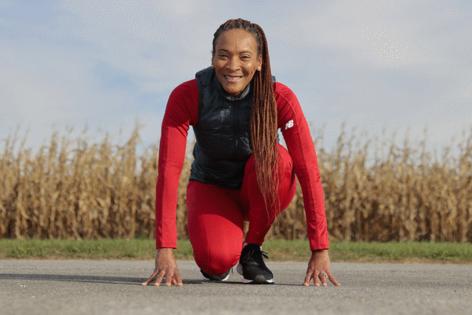 PHILADELPHIA — I was jogging along Kelly Drive a little more than midway through my first Philadelphia Marathon back in 2011 when I glanced up from my plodding feet and spotted Dawn Angelique Roberts.

A back-of-the-pack runner, I still had a considerable distance to go in the 26.2-mile course, but Roberts was on her way toward the finish line. My jaw dropped as she smiled, waved and kept running. I was moving pretty steadily but finished an entire hour behind her. Roberts, who I know through local journalism circles, is that kind of runner — fast and always sunny and upbeat.

That is until 2019, when she started suffering chest pains every time she went out for a run. Roberts, whose best marathon time was 4 hours and 26 minutes, suddenly couldn't run a half-mile without feeling a sharp pain in her chest that wouldn't stop unless she stopped moving. She suspected something was seriously wrong. But a cardiologist she visited essentially pooh-poohed her discomfort — not once, but twice.

"I was feeling a pain that was very uncomfortable that I had never experienced before," Roberts recalled. "His words to me were 'Get out of here. There's nothing wrong with you. Go see a neurologist.'"

Heart failure can occur during pregnancy, and Black women fare worse than others. Penn doctors are starting to find out why.

Roberts, a professional running coach based in Middletown, Del., knew her body well and recognized that something was seriously off. Plus, she knew her family had a history of heart disease. So, she consulted with doctors she found online; they encouraged her to keep looking for answers.

On Dec. 27, 2019, she sought out a second cardiologist's opinion, this time at Temple University, and got the startling news: She had a 99% blockage in her left anterior descending artery — which can lead to a type of heart attack commonly known as the widow maker because of how frequently it kills. Roberts underwent a procedure that same day to clear the blockage and implant a stent.

It saved her life.

Roberts is now speaking out about her experience to warn others — particularly women. She wants them to be aware of the implicit gender bias in health care that causes some physicians not to treat them as aggressively as they do male patients with the exact same symptoms.

Roberts is one of the lucky ones because she found out in time. She lives accordingly.

On Saturday, Roberts plans to celebrate her 52nd birthday at 8 a.m. at the annual Philadelphia Heart Walk at Citizens Bank Park. Before that starts, she'll lead participants in Penn Medicine's Gritty 5K through a warm-up routine. When all that's done, she'll stop by the Philly Bike Expo at the Pennsylvania Convention Center.

I'd never really thought much about it from that perspective.

Although I understood that a heart-healthy lifestyle was an important protection against disease, I had never really stopped and considered how being in optimum physical health helps the body recover if indeed something does go wrong — as it did for Roberts.

I'd be lying if I didn't admit that I was impressed — and inspired. Maybe not enough to do another marathon any time soon, but at least to keep moving.