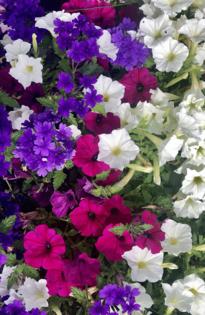 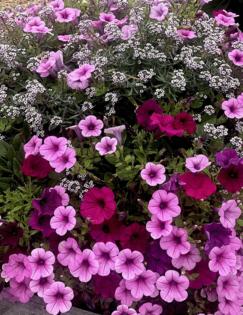 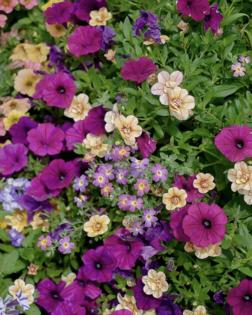 Viva Magenta, Pantone's Color of the Year for 2023, has certainly caused a stir in the garden world. As typical of our times, there are the lovers, and the haters. Since it is a primary color, I thought I would delve into a little thought on color.

Before everyone screams, especially art teachers, I know it is not a primary color by traditional standards. I grew up in a newspaper family, and magenta is one of the big four in the color model used in color printing, along with cyan, yellow, and of course black (the model is referred to as CMYK). The whole world of glorious print color revolves around the role of magenta. With that said, may I introduce you to Supertunia Royal Magenta.

This incredible Supertunia has no trouble standing on its own like other Supertunias, but I want you to look at it from the aspect of what else you can do with it.

In the print world they call CMYK subtractive color. Each color has its own plate made from a separation. The end result is none of them will be 100% of their color, but they come together magically in full color. With Supertunia Royal Magenta petunia, we will use it in additive color mixing, which is really what we do in a design. In other words, Supertunia Royal Magenta is so beautiful, and what we add to it or partner with it can make the design even more dazzling.

The past few years I have been able to see and photograph Supertunia Royal Magenta petunia recipes, both named and experimental. I came to realize what a key ingredient this flower has become. British horticulturist Gertrude Jekyll at one time called it "malignant magenta," which was due to the process of getting the dye at that time. Perhaps it seemed unnatural. I believe she might love it now.

The most recent combination I photographed was given the name "Surfin' Safari" by the creator. This no doubt was due to how the new Safari Sky, a South African phlox, or Jamesbrittenia, with sky blue flowers, plays a key role. The third partner was Superbells Double Amber calibrachoa. This was actually very close to the three colors of CYM appearing together in a flower recipe, and it was beautiful.

A recipe you would just crave to have in your containers is called Boost of Energy. Every time you water it you would leave feeling exhilarated. The obvious ingredient is Supertunia Royal Magenta petunia, but the partners are two we often overlook or let slip by. The first is Blushing Princess sweet alyssum. We are so quick to buy Snow Princess that we don’t see the possibilities of a Lobularia or sweet alyssum with a blush of purple/pink. May I remind you these are sweet alyssums that keep performing all summer.

The third partner in the mix was just amazing, and you have to see it work to understand. It was Supertunia Trailing Rose-Veined petunia. This petunia gets 12 inches tall with a spread of 3 feet. It was magical the way the rose-veined flowers echoed the color of Supertunia Royal Magenta petunia.

Supertunia Royal Magenta petunia can also give you a slight twist on the old red, white and blue. I had a chance to photograph this experimental recipe before it had a name, and I could not take my eyes off it. It features Supertunia Royal Magenta petunia, Supertunia Mini Vista White petunia and the new Superbena Imperial Blue verbena. I promise you’ll love it. Here is a salute to Pantone 18-1750, the 2023 Color of the Year. Indeed, long live magenta.

Viva Magenta is the hot new color for 2023, according to Pantone, the gurus of all things color. Specifically, it is Pantone 18-1750. In the garden world, flowers will never be able to be bred so specifically so as to ...Read More

National Poinsettia Day is fast approaching — Dec. 12 to be exact. While I am sure the powers that be wanted a celebratory day, from what I have been seeing this year is that this may be a deadline day. Have your ...Read More