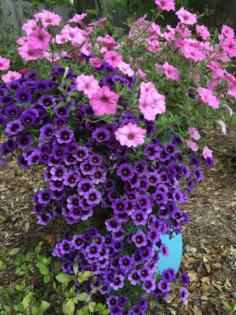 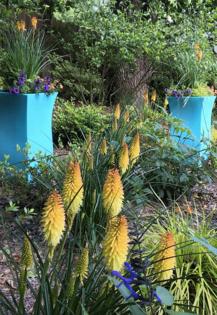 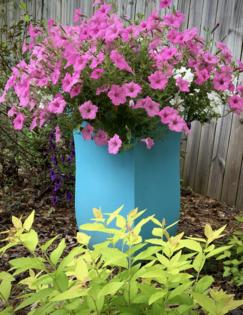 Aqua blue pots in the landscape and staggered on the side of a hill were not my idea, but my bride's, the person who pops up on my phone as Jan My Love Winter. I have avoided this color like the plague for most of my life. To modify the French phrase, this project was going to be my "peace" de resistance. Jan is a gifted and natural plant groomer when it comes to our mixed containers, so making peace is the goal.

The containers have two sections, a lower reservoir for pea gravel and the upper-level for a good lightweight potting soil, which I consider the critical element for all containers and baskets. I was also required to drill drainage holes in the upper-level compartment, and in the bottom.

Since the containers were to be staggered on a slope, I decided to wait until they were planted to level up not only with each other but from every angle in the landscape. For this I used wood shims much like you would use for furniture in an old house.

Since the pots are so colorful, I wanted a healthy dose of complementary colors. I chose Pyromania Orange Blaze kniphofia or red hot pokers for thriller plants and Superbells Coral Sun calibrachoas for a little echo support. I also used Superbells Grape Punch calibrachoa and Illusion Emerald Lace ornamental sweet potato to contrast and create a mix of contrasting color.

Colorful pots positioned out in the landscape also required a little thought to ground planted color. I wanted there to be a tie-in, so I chose several Pyromania Kniphofia called Back Draft to create a visual echo in between the three pots. Back Draft is a little larger, but both varieties offered a pleasing grassy texture when not in bloom.

Pyromania Kniphofias are recommended for the most part from zones 5b to 9b. As you deadhead blooms, you’ll see new bloom stalks developing. Even when not in bloom, the Pyromania Orange Blaze looks regal in my mixed containers.

The kniphofias are also called torch lily or red hot poker and their DNA traces back to Africa. The Pyromania series are Kniphofia hybrids reaching 30 to 48 inches tall with a 30-inch spread. As the name suggests, the torch lily is in the lily family and looks like a grass except when it blooms, revealing some of the most beautiful flowers on the planet. These stunning flowers attract an assortment of pollinators including hummingbirds.

Sometime last October I tweaked the containers by adding Supertunia Vista Bubblegum petunias and Superbena Whiteout verbena. Shockingly the Superbells Grape Punch calibrachoas planted in spring 2021 survived and now touch the ground after tumbling over the rim of the 36-inch-tall containers. The October-planted Supertunia Vista Bubblegum survived the cold winter and are enormous. There will be grooming challenges for Mrs. Jan, but for now everything is a wow.

When Jan mentioned containers on the side of the hill, I was thinking of Old World-style clay olive jars. I have to admit Jan My Love Winter’s aqua blue selections, which challenged me to the max, were not just the "peace" de resistance but actually, as the French proclaim, the pieces de resistance. I don’t aspire or claim to be a garden marriage counselor, but giving in every now and then can be a beautiful thing.

Swallowtails were early at The Garden Guy’s house this year. Thank goodness I had Superbena verbenas in full bloom. It is as if they had been given the task of announcing the arrival of spring and the butterfly season. ...Read More

Recently I stumbled across a plant recipe called "This is the Life." Not only was it a collection of some of my favorite plants, it was a wake-up call to an old favorite: the Persian Shield. Known botanically as ...Read More

As I write this on April 3, today was the day the ruby-throated hummingbirds returned to my house. Oddly, it was a feast of the Calibrachoas Superbells. This story, however, starts the first week of October, which is when ...Read More

Blue My Mind and last year’s sibling Blue My Mind evolvulus are surefire winners of the 2022 Best Supporting Flower. This is for the flower that delivers an outstanding performance in a supporting role.

As I write this,...Read More

Diamond Snow has dramatically changed how we look at euphorbias, that not-so-glamorous common name of spurge. We all fell madly in love with its sibling Diamond Frost and subsequently gave it hundreds of awards in ...Read More

The past couple of years there has been a lot of love in the world of petunias, thanks to one unique variety by the name of Supertunia Lovie Dovie. We have all seen petunias with stripes, some stars, others halos and ...Read More