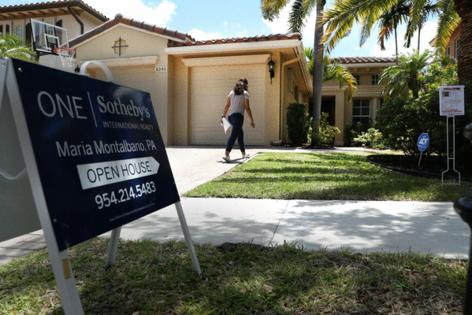 The average 30-year fixed rate for a mortgage reached 6.49%, following a few weeks of decreases from the record highs of over 7% seen last month, according to the Mortgage Bankers Association.

Purchase applications have increased slightly, though rates are not low enough to draw in people to refinance, he added.

Many potential homebuyers have been frozen by the rising, and at times volatile, mortgage rates and have waited on the sidelines in the hopes that rates will fall.

However, it’s still too early to tell where rates will ultimately land, and if this is a permanent plateau, experts cautioned.

“We would hope that this is a trend, that they are going to at least stabilize in the sixes and not bounce back up in the sevens,” said Diane Mastay, mortgage director with Tropical Financial Credit Union in Miramar, Florida.

The Federal Reserve has raised the federal funds rate, or the rate at which banks lend each other money overnight, by about three quarters of a percentage point six times already this year in an effort to tamp down on rising inflation. The Fed has signaled that while it plans to continue with these hikes, it may do smaller increases in the future.

Mortgage rates in the U.S. fell for a fourth straight week.

Mortgage costs have come down almost a ...Read More

Q: Our condo recently passed a special assessment to make us pay for some improvements to the pool area that are a waste of money. What happens if I refuse to pay since I disagree with how the money will be used? — Alfie...Read More