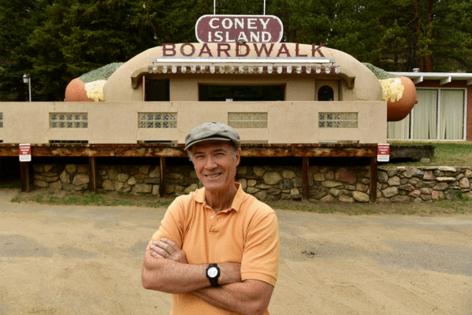 Ever since it first went splat on West Colfax Avenue in Denver in 1966, the Brooklyn transplant and hot dog stand has become a local roadside legend.

It's now nestled in the mountains alongside Highway 285 in Bailey, Colorado, its third home, where it has sat since 2006.

The bun-shaped restaurant continued operating on and off until 2021. Before the pandemic hit, it nearly went to public auction for unpaid taxes. This week, the wiener went up for sale for the third time, at least, in just over a decade. It’s been a long journey for the Coney dog.

This time, owner Greg Aigner has priced the property — which includes the giant stand attached to a small house and a neighboring gift shop with two apartments — to sell at $1.5 million. It’s around the same price that his brother, Ron Aigner, listed it for back in 2015.

“That’s pretty much an estimate of what my brother has into it,” Greg Aigner, 65, explained. He acts as conservator of the Boardwalk since Ron Aigner, 72, lives in Uruguay.

A retired Jefferson County Public Schools teacher, the younger Aigner now spends a few days each week on Old Stagecoach Road fixing up Coney Island. The house needs a new roof, the stucco on the hot dog needs replacing and the boardwalk itself needs repaired.

“The goal is to get it open as soon as possible,” Aigner said.

He’s working with neighboring business owners to search for buyers who will “keep it local.” But he also wonders if “South Park” creators Trey Parker and Matt Stone would be interested in adding the Coney to their list of saved Colorado attractions. After all, Parker is from neighboring Conifer.

And like Casa Bonita, which the duo purchased last year, Coney Island Boardwalk is known more for its structure than its service — or even its food.

“I went to college down in Durango, and I was up and down (Highway) 285 all the time,” Aigner said. “And I only went in one time. I didn’t really care about the food… but just to be inside of it…” he said, trailing off.

When his brother had the 42-foot hot dog loaded onto a flatbed semi-truck and driven down to Bailey, it was a sight to behold. A couple of weeks earlier, customers had lined up by 11 a.m. in Aspen Park to order their last hot dogs from the Boardwalk. The Coney was welcomed just a couple of towns over with an old-fashioned (and single-grill) hot dog cookout.

Fast-forward 16 years and the Boardwalk sits like a still-life for drivers along Highway 285. Families will still stop for the Colorado Coney Island experience and settle for a photo opp. A February episode of “South Park” somehow anticipated all of this.

“We know that good houses are getting hard to come by in South Park,” the realtor on the episode starts. “And that’s why we are so excited to bring you this exceptional new property. This is the historic Aspen Park hot dog: 200 square feet of pure luxury.”

The question now is whether that one-off sitcom joke could become a real-life business endeavor.

t's a perfect storm for the stock market this year: geopolitical turmoil, high inflation, and higher interest rates in 2022.

And that's driven out many market newcomers, including "meme" stock investors, whose holdings ...Read More

Q: I am a remarried widow and live with my husband. I bought our home before our marriage, and only my name is on the deed and mortgage. We agreed to leave the property to my three sons from my first marriage, who would ...Read More

California could soon help first-time home buyers with their down payments and mortgage costs under a proposed $1-billion program to make homeownership more financially feasible for low- and middle-income residents.

Bitcoin extended losses, dropping below $30,000 for the first time since July 2021, putting its decline from a November record high to more than 55% amid a global flight from riskier investments.

Looking for ways to contribute to your favorite animal charity, beyond making a cash donation? Here are some generous alternatives to consider when you want to support a nonprofit cause you love.

Bequests for wills or ...Read More