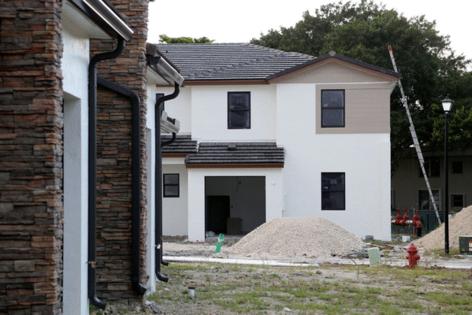 It’s tough out there for would-be home buyers. Too many people chasing too few properties, and down payments that keep getting further out of reach.

But here’s an idea whose time might have come: New homes built to be rented, not sold.

And it’s catching on across the U.S., with “build for rent” programs gradually taking hold in overheated housing markets.

One such development — a 39-unit townhome project in the lush Palm Aire section of Pompano Beach, Florida — is nearing completion.

Its two-story homes are nicely appointed with a pool and clubhouse, small backyards, golf course views and smart technology that controls security, thermostats and other key functions.

The project is being built by Stellar Communities of Dania Beach, and homes will rent from possibly $3,200 a month. Stellar has a number of other rental projects on deck, with plans to build thousands of units in housing-crunched Florida and elsewhere around the Southeast.

“I think this is type of product is good for the baby boomers and the millennials,” said Stellar managing partner Larry Baum. “They are the two largest demographics in the country. The baby boomers — some of them would rather rent. The millennials don’t have the down payment to buy, so they rent.”

A surge in demand

Brad Hunter, president of Hunter Housing Economics in West Palm Beach, Florida, has been following the emergence of single-family home rental projects since their inception several years ago. He said the idea took hold in Phoenix, which was the scene of massive numbers of foreclosures during the housing collapse in 2008, and moved across country to Texas, the Carolinas and other points in the South including Florida.

“There is a huge need for it,” Hunter said. “It’s a project alternative that really didn’t exist — being able to rent a detached single-family home or a townhome with a yard in a community.”