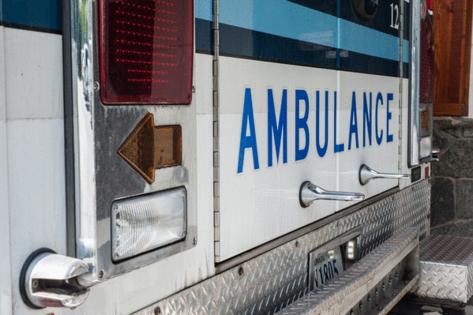 Beginning in 2022, even if you end up in an emergency room, and you find out later that anyone on the medical team was not in your insurer’s approved network, you won’t be stuck holding the bill for getting health care.

Congress has finally outlawed “surprise” billing that has left patients with higher costs when they didn’t have the foresight to figure out in the middle of an emergency if everyone working on their case was in their insurance network. The No Surprises Act also prohibits those out-of-network emergency healthcare providers from going after patients for the difference between what an insurer paid them and what they actually billed. That all too common practice is known as balance billing.

But there’s one big honkin’ caveat to this good news: The federal law does not cover ambulance rides to the hospital, except for air-ambulance transport.

New research from Health System Tracker, a joint project of the Peterson Center on Healthcare and the Kaiser Family Foundation, found that more than half of all emergency ambulance rides in 2018 ended up being out-of-network. Separate academic research published last year estimated that the median cost of surprise bills for out-of-network emergency ambulance rides is $450. In high cost areas such as New York City, it can be at least double that amount. Often, much more.

There doesn’t seem to be a big powerful ambulance lobby behind the exclusion of ground ambulance rides in the new legislation. Rather, Congress got all twisted in knots trying to understand each state’s ambulance system and regulations. The Peterson-KFF report notes that nearly two-thirds of emergency ambulance rides were provided by a government entity, such as a fire department. Throttling a government service from collecting ambulance fees would likely require a municipality to raise other resident user fees, or taxes. That’s not something many elected officials are eager to pursue. Thus, Congress opted to punt, saying it will study the ground ambulance ecosystem before considering any regulation of its surprise billing practices.

How to (maybe) navigate around out-of-network charges

To state the obvious: In a searing emergency situation, the reality is that you are in no position to advance shop for in-network transport. About all you can do is pressure your congressional reps to focus on that promised study of the problem.

That said, keep in mind that if you find yourself needing non-emergency ambulance transport, you have more control. For instance, if you are being transported from one facility to another, say from a hospital to rehab, you might have the time — if not the energy — to contact your health insurer and ask what in-network options you have for your ambulance ride.

Yet, the reality is that this is just reason 4,285 why having a bulked-up emergency savings fund can be so important for your financial health. It’s not just the deductibles and copays on doctor bills, tests and treatment that can add up. Merely trying to get to a hospital in an emergency can drive you into debt if you don’t have the cash ready to pay for the ambulance ride.

In less than 15 years, Americans 65 years old and older will outnumber Americans under 18.

If you’re one of millions rounding the bend toward 65 in the next decade or so, getting up to speed now on Medicare's ...Read More

If you’re approaching retirement, chances are you’ve had more than a few job changes. A government report tracking baby boomers (born 1946 to 1964) estimates they hopped jobs an average of 12 times before hitting their...Read More

State and local governments picked up the pace of distributing emergency rental assistance funds in September amid a push from the Biden administration to accelerate payments to households.