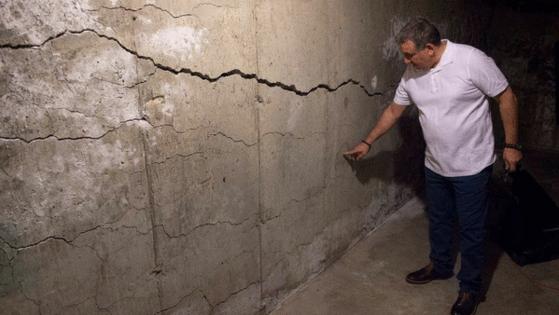 Connecticut lawmakers approved a bill meant to protect owners of homes with crumbling foundations and prevent the faulty concrete that caused the costly and widespread problem from ever being used again.

Among other provisions, the legislation removes a five-year cap on revaluing affected properties and makes permanent a state-funded insurance company dedicated to helping homeowners whose dream properties turned into nightmares.

The bill also requires quarries that produce aggregate for concrete to prepare a geological source report annually and commissions a report on damage to nonresidential buildings throughout the state.

Concrete used in homes in eastern Connecticut contained the mineral pyrrhotite, which degraded foundations. Without repairs costing $150,000 to $250,000, affected homes eventually would be uninhabitable.

Shawn and Kim Kowalyshyn of Willington were among residents who wrote to legislators urging passage of the bill. The Kowalyshyns bought their home in 2007 for $345,000 and spent another $40,000 on renovations. They learned in 2015 that their foundation was falling apart, and like other affected homeowners, found no relief from their home insurance provider.

“We are hard-working, middle-class people who raised and put through college our four kids, so needless to say, we don’t have a lot of money,” the couple wrote. “Thank goodness for the captive insurance company — we are finally having our basement replaced in June.”

The captive insurance company is the Connecticut Foundation Solutions Indemnity Company, formed in 2017 and focused on helping homeowners replace their cracked and weakening foundations. So far, the company has paid out $64,236,481 for 315 foundation replacements and 78 foundation reimbursements, company Superintendent Michael Maglaras said.

Funded by the state and through a surcharge on Connecticut homeowners’ insurance policies, the company was due to be terminated next year, but the bill eliminates that sunset date.

“We have been told that only if the sunset date is extended may we be eligible to have our basement repaired in 2026 or 2027,” James and Evelyn Dahl of Manchester wrote to legislators. “We will be 81 and 79 years of age. Not what we had in mind for our retirement... If the state does not help us out, we are not sure what we will do.”

If you’ve saved well enough to retire, but can’t quite decide which you’d enjoy more — retiring now or continuing to work — there’s a piece of research that suggests you might live somewhat longer if you keep ...Read More

WASHINGTON — Saving for retirement — and understanding your benefits — could get a lot simpler soon.

Older people could contribute more to their retirement savings. Part-time workers could find it easier to build ...Read More

Among the best advice on retirement investing you’ll receive is to set your asset mix and then mostly ignore the ups-and-downs of the stock market.

But when ...Read More

For millions of Americans, there’s an unwelcome side of the return to business-as-usual after the pandemic: They’ll have to start repaying their student loans again.

More than 40 million holders of federal loans are ...Read More