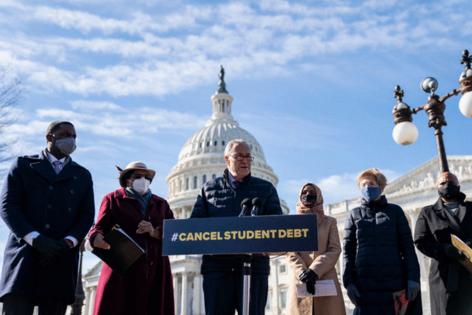 For millions of Americans, there’s an unwelcome side of the return to business-as-usual after the pandemic: They’ll have to start repaying their student loans again.

More than 40 million holders of federal loans are due to start making monthly instalments again on Oct. 1, when the freeze imposed as part of Covid-19 relief measures is due to run out. It covered payments worth about $7 billion a month, the Federal Reserve Bank of New York estimated. Their resumption will eat a chunk out of household budgets, in a potential drag on the consumer recovery.

Americans now owe about $1.7 trillion of student debt, more than twice the size of their credit-card liabilities. Politicians recognize it’s not sustainable. Yet for all the talk of loan forgiveness during last year’s election campaign — including from President Joe Biden, who promised to write off at least $10,000 per borrower — there’s been no progress toward shrinking the pile.

Graduates fresh out of college or postgrad programs, when incomes are typically lower, tend to find payment especially hard. Since the U.S. economy is still 7.6 million jobs short of pre-pandemic levels, many more of them are likely to be out of work now.

But the student debt problem reaches deep into pretty much every demographic. Black borrowers are most likely to struggle, studies have shown. Retirees as well as recent graduates are on the hook.

And the impact on the wider economy shows up in all kinds of ways. Student debt is one reason why record numbers of younger Americans still live with their parents. It acts as a brake for people who’d otherwise want to start families or businesses — and leaves millions of households short of cash to spend or invest. “I’m going to have to probably get a second job,” speculates Dan Ott, 55, a management consultant in San Francisco who has about $200,000 in student debt. “We will have to cut back, and it will certainly be painful.”Before the pandemic, it was clear that Americans were having trouble meeting their student-debt obligations. Loans in serious delinquency (more than 90 days late) exceeded $135 billion before the freeze — a higher rate than for most kinds of debt.

The New York Fed cautioned that the real number of loans gone bad is likely twice as high, since many borrowers haven’t reached the stage where they have to start making payments.

What’s made the squeeze worse is that college degrees — which are now much more widespread — turned out to be assets with a diminishing return in terms of enhanced earnings, according to a study by the St. Louis Federal Reserve.“For recent generations and for non-white students, the payoffs are somewhat lower than average,” wrote analysts William Emmons, Ana Hernández Kent and Lowell Ricketts. “The conventional wisdom about college is not as true as it used to be.”

The sense that degrees have been mis-sold underlies some of the calls for debt forgiveness. Many Democrats like Senator Elizabeth Warren and Representative Alexandria Ocasio-Cortez have called for write-offs of $50,000 or more per borrower. Local leaders are pressuring the Biden administration to take action.

A bill advancing through the California Legislature to allow for denser home building in single-family zones would be likely to produce an uptick in the state’s housing supply, but the so-called upzoning probably won’t...Read More

The Chicago City Council has approved the sale of the former Michael Reese Hospital site and zoning for a $4 billion mixed-use redevelopment, inching the proposed Bronzeville lakefront project closer to breaking ground.