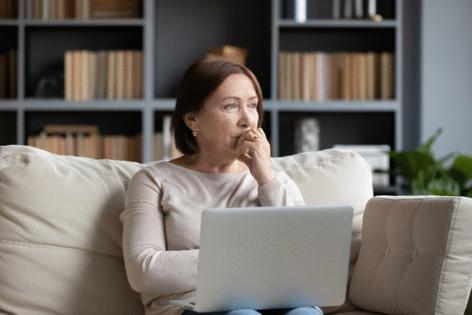 Research in the Journal of the Economics of Ageing suggests aging couples — and their families — ought to prepare quite differently to support a widow or widower when a spouse dies.

Jialu L. Streeter, a research scholar at the Stanford Center for Longevity, pored over data from an ongoing national research project that has been checking in with thousands of participants periodically for more than 30 years to record their financial and mental states. Streeter focused on data spanning 1992-2016.

She found that widows experience a 22% drop in their income, while men do not have any appreciable income decline. (More on why below.) Women also report higher earnings once widowed, suggesting that going back to work, or working more, is one strategy for offsetting the loss of income.

Women also eat into their wealth (savings, investments, etc.). In year 14 after being widowed, women’s wealth has declined by 23%. There is no marked decline for widowers.

But women do better emotionally. The ongoing survey asks people to share their estimation of where they are on eight measures that tie into mental health: the extent to which a participant says they are experiencing depression, loneliness, sadness, unhappiness, not enjoying life, restless sleep, finding everything is an effort, and inability to get going.

Losing a spouse obviously packs an emotional wallop in the early going for men and women. But Streeter finds that women’s self-reported level of well-being gets back to their pre-widowhood level within four years. After eight years, widowers are still not back to their baseline.

How to plan to help surviving wives

Due to longer life expectancy and the fact that most women are younger than their husband, it is far more common for women to be the surviving spouse. Federal data reported in 2017 there were more than three times as many widows as widowers.

The likelihood that the wife will be the surviving spouse should help focus all retirement decisions on one central imperative: Does doing X provide the most financial security for the wife?

If you use that frame, it becomes ever more clear that the highest earner in the household (typically the husband) will want to delay starting Social Security until age 70 to qualify for the biggest possible benefit. Surviving spouses can’t collect two benefits. They must decide between theirs or their spouse’s. All too often, husbands retire first, and decide to start their Social Security at that point. In terms of providing for their wife, waiting until age 70, when possible, is a smarter strategy.

If a pension will be a vital source of retirement income, and the husband is the pensioner, he should opt for the 100% joint and survivor benefit. Yes, that means the payout when you both are alive will be less than if you just based payouts on the husband’s life. Again, the focus should be on what happens when the pensioner dies. The 100% provides the most possible income for the surviving spouse.

Ideally, both spouses should be fluent in their financial accounts. If one of you wants to take the lead, that’s fine. But you both must be aware of how things work. Surveys report many widows are somewhat clueless, which leaves them in the horrible position of having to learn while grieving.

If you work with a financial planner or adviser, but only one of you is the contact person, that’s a red flag. Surviving spouses left out of the relationship often lack trust and connection with the one person who could take a lot of the pressure off in the early going.

How to plan to help surviving husbands

Spouses rely on each other for social and emotional support. But research has shown that husbands tend to build all their social systems around their wife, while wives are typically more likely to also have networks of friends and deeper connections to kids/grandkids that they rely on for support. Those extramarital friendships may help explain why widows are able to (eventually) regain their emotional bearings, while widowers struggle more with loneliness, depression and sadness.

Husbands and wives who are conscious of this dynamic might more intentionally encourage the husband to nurture friendships and establish bonds with their adult children and grandchildren, if that’s currently an issue.

Or if you have reason to think the husband may be the surviving spouse, ask each other if that might drive decisions about where to live in retirement. Would being closer to the kids/grandkids today help later on? Or perhaps a continuing care retirement community (CCRC) might work well. You can be as independent as you’d like, but there is a built-in community when one spouse dies, and if needed, it is possible to transition to assisted living/memory care within the CCRC.