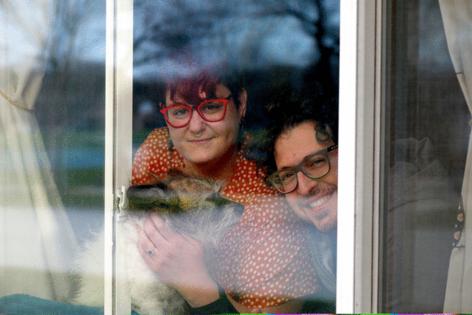 Peter Maloney wanted to move back to the Chicago area from Florida, but with $44,000 in student loans to repay he figured it would be several years before he could buy a home.

Maloney, 26, considered moving to Indiana, where he would be close to family and homes are less expensive. But he and his fiancee were sold on Illinois after learning about a state program that helps homebuyers pay off student loans and provides down payment assistance.

In June, Maloney will close on the purchase of a two-bedroom, two-bath condominium in Plainfield, Ill. “It definitely made the decision (to move) easier, and buying a home possible,” he said.

The SmartBuy program, offered by the Illinois Housing Development Authority, has drawn interest from other out-of-state buyers too, said Executive Director Kristin Faust.

The agency hopes the program, which began in December, will help remove one financial barrier to homeownership and make access more equitable.

The program will pay off up to $40,000 in student loans, or a loan amount equal to 15% of the home purchase price, whichever is lower. It will also provide a $5,000 loan toward a down payment or closing costs.

The state allocated up to $25 million to the program in Gov. J.B. Pritzker’s 2019 Rebuild Illinois capital plan. The money is expected to serve between 600 and 1,000 homebuyers.

To date, the agency has paid off an average of $24,100 in student loan debt for each buyer.

Prospective homebuyers in the Chicago area must have household income of no more than $109,200 to be eligible. The home purchase price limit is between $325,000 and more than $500,000, depending on the location and type of home.

The program comes with other caveats. A buyer’s full outstanding student debt must be paid off during the home purchase. The home must be the buyer’s primary residence, and if they sell within three years they must repay a portion of the student loan assistance and sell to someone who meets the program’s income requirements. The sales price cannot exceed the program’s limits.

Buyers can apply for the program through one of about three dozen lenders that have partnered with the state. The Illinois Housing Development Authority sets the interest rate on the mortgage.

Nearly 200 buyers entered the SmartBuy process between Dec. 1 and late March, and 26 had completed purchases, according to the agency. About 10 of those who had entered the process were from outside Illinois.

“I’m getting a lot of interest,” said Chanon Slaughter, a vice president of mortgage lending at Guaranteed Rate. “I am getting folks literally saying ‘I want to move back to Chicago for this program.’”

Student loans delay first-time buyers from purchasing a home by about seven years, and current owners from buying their next home by about three years, according to a 2017 study from the National Association of Realtors.

The delays could add up in Illinois. More than 2 million residents have student loan debt, with an average balance of nearly $30,000, according to the state treasurer’s office.

Owning a home is a key way to build wealth and pass it from one generation to the next, so delays in purchasing a home ripple through the economy and individual households, Faust said.

“I think as a society we’ve said if you go to college and you do well and you graduate and you get a job, you should be able to buy a house,” she said. “And then instead we’ve saddled this generation with a lot of student debt.”

The U.S. Department of Education has announced a variety of student loan relief programs during the COVID-19 pandemic. But for some Illinois buyers, a more immediate path to paying off student loans was too good to pass up.

Mo Hoelker, 33, didn’t want to depend on government bureaucracy for loan relief when there was an option readily available, she said. She and her husband, Sam, left their Chicago apartment and purchased their first home through the program in February, a three-bedroom, two-bathroom house in Mount Prospect, Ill.

She wondered if she could have gotten a lower rate had they not used SmartBuy. But she decided having about $18,000 in student loans paid off outweighed those potential costs over the course of roughly a decade.

The several hundred dollars she used to pay in student loans each month is helping pay her mortgage, which made her more comfortable committing to a large payment, she said.

“I think, at the end of the day, what I’ve gained by using this program truly was financial peace of mind,” she said.

Wintrust Mortgage, one of 34 lenders in the Chicago area working with the state on the program, has prequalified several people from other states, mostly from Indiana and Wisconsin, said Jason Accola, a senior mortgage consultant. Maloney, moving back to the area from Florida, is his only out-of-state client under contract.

About $33,000 of Maloney’s $44,000 in student loans will be paid off as part of the SmartBuy program. Maloney will pay off the rest of that debt.

That means the roughly $400 each month he’d be paying under a standard loan repayment plan can now go to his mortgage, he said.

Without the program, he estimated it would have been another five years before he bought a home.

“It made a huge difference in being able to purchase something in an area that we’d want to live, and have a little bit of space,” he said.