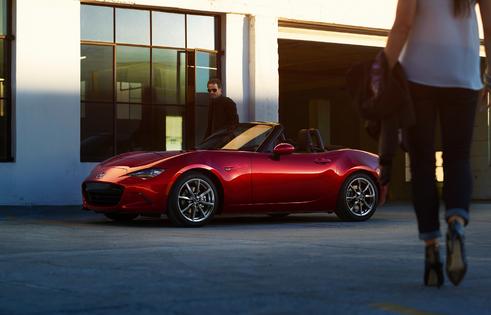 The Miata is an unusual Mazda. It is the only two-door, soft-top, rear-wheel drive and manual transmission-equipped car Mazda still sells. It is also the most affordable roadster you can buy.

Prices start at $26,830 for the base Sport trim, which comes standard with a manual-folding soft-top as well as a six-speed manual transmission.

A six-speed automatic is available optionally.

Club versions, which sticker for $30,290 to start, add a shock tower brace, limited slip differential and Bilstein shock absorbers to enhance the car's already nimble handling. Also included are heated seats and an upgraded nine-speaker Bose audio system. This is three more speakers than come standard in the Sport trim.

The key to the Miata's success is not messing with what makes it successful. The current Miata is basically the same Miata with no significant changes made since the 2016 model year, which is when just a few minor changes were made. But nothing that altered the Miata-ness of the car, which has been largely the same car since its 1989 introduction.

Soon -- in just a few years from now -- VW says it will only be selling electric cars. Right now, it is one of the few companies selling cars at all.

The rest are selling almost nothing but crossovers and SUVs.