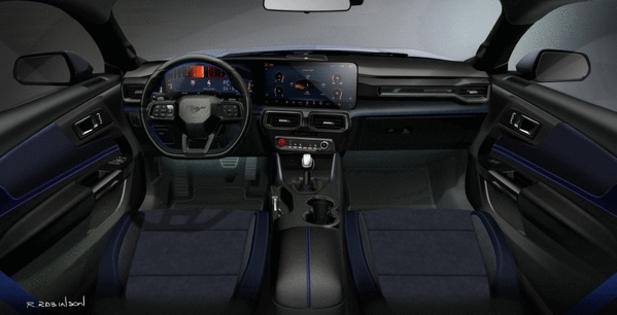 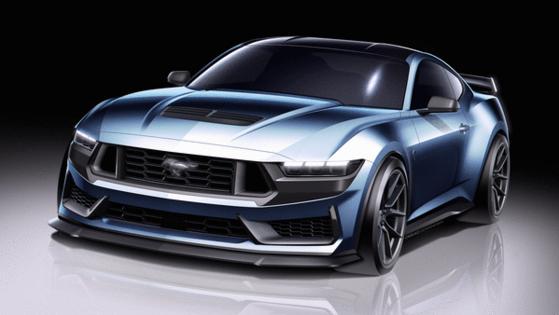 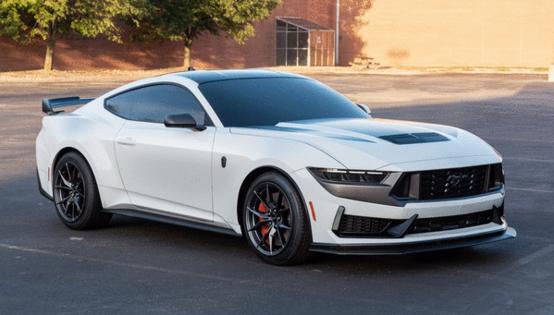 DETROIT — A more technologically advanced interior, "edgier" exterior and new engine options are among the highlights of the next-generation Mustang that Ford Motor Co. unveiled at the Detroit auto show Wednesday with enthusiasts on hand to mark the next chapter of the iconic pony car.

The Dearborn automaker revealed the seventh-generation Mustang with an event at Hart Plaza that served as the culmination of a "Stampede" of roughly 1,000 Mustangs driving from Ford World Headquarters in Dearborn.

The event also included a few surprises: the introduction of a new Mustang performance series called Dark Horse that features a 500-horsepower Coyote V8 engine and manual transmission, as well as racing variants. It's Mustang's first new performance series in more than two decades — and Executive Chairman Bill Ford announced the pony car would be making a return to the 24 Hours of Le Mans race.

"When this car was being conceived, the first question I asked the team is, 'Will it race at Le Mans?'" he told reporters. "'And if the answer is no, go back and give me another answer.'"

The next-gen Mustang, redesigned for model year 2024, marks the latest chapter in a storied history that dates to the vehicle's launch in 1964. The redesign is Mustang's first since the sixth generation launched in 2015 as a global product for the first time.

Though updated with new technological features that designers said they hope will broaden the Mustang's customer base, it's sticking with its legendary internal combustion engine — even as segment competitors like Dodge discontinue gas-powered models in favor of all-electric ones.

Mustang fans who are dreading the possible extinction of the V8 have an ally in Bill Ford, a noted fan of the pony car.

"People have asked me, 'Will this be your last internal combustion Mustang, and the answer is, 'We'll see,'" he said. "The customers will let us know when that day will come. Personally, that day will come with a tear in my eye, because I've loved the Mustangs all the way from the '64 through this."

The continuation of the internal combustion engine in Mustang reflects a broader strategy within Ford to offer a variety of options to customers even as the auto industry moves closer to an electric future. Top executives told Ford dealers this week that they see plenty of room for growth in the years to come in Ford Blue, the new business unit dedicated to the company's legacy ICE products.

"Investing in another generation of Mustang is a big statement at a time when many of our competitors are exiting the business of internal combustion vehicles," Ford CEO Jim Farley said in a statement Wednesday. "Ford, however, is turbocharging its ICE growth plan, adding connected technology, opinionated derivatives, and hybrid options to our most profitable and popular cars — all in the Ford Blue family — on top of investing $50 billion in electric vehicles through 2026."