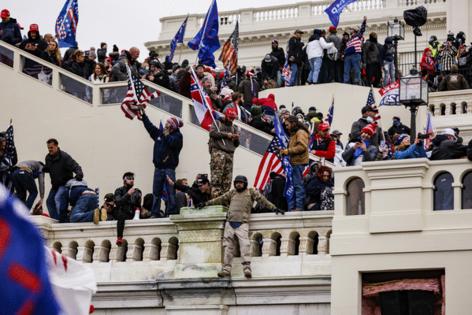 In a digital ad released earlier this week titled "Navigating to Treason," MoveOn parodies an ad for a GM vehicle.

"Our leadership doesn't start and stop at the garage door. That's why General Motors PAC proudly supports politicians who help us stay on top, even when they support violent insurrection," the ad reads. "Introducing the 2021 General Motors PAC Lineup, with innovative sedition stoking capabilities and best in class disinformation spreading technology."

According to watchdog group Citizens for Responsibility and Ethics in Washington, General Motors has donated $47,000 to 12 members of Congress and their leadership PACs who voted not to certify the election results on the evening of Jan. 6.

A protest of the certification turned violent when hundreds of Trump supporters rushed the Capitol building, climbing over barricades, fighting with police, breaking windows and furniture and rifling through members' offices. Lawmakers, staff and media were locked down and then evacuated from the building. Two people died from clashes during the siege and three others died from medical emergencies.

"We stopped political donations after the Jan. 6 attack," the ad reads. "Now we're back to writing big checks to people who objected to the election. Together we're undermining the very foundation of American democracy."

GM had initially said it would "pause" new donations and said it had in 2020 "enhanced the character and public integrity criteria for making contributions and that will help to guide our decisions moving forward."

MoveOn says it wants GM to stop donating to members who voted to overturn the election results, as Toyota did in July after facing pressure from The Lincoln Project, a political action committee founded by Republicans.

The digital ad is being targeted to "a range of audiences" including people who like and follow GM on social media, MoveOn said. The campaign will be expanded next week to coincide with the MotorBella show in Pontiac, Mich., which is replacing the canceled Detroit Auto Show this year.

"The General Motors employee-funded PAC supports the election of U.S. federal and state candidates from both sides of the aisle who foster sound business policies, support American workers and understand the importance of a robust domestic auto industry as we pursue an all-electric vehicle future," GM spokesperson Jeannine Ginivan said via email.

Boeing, Cigna, Walmart, PNC and UPS are among other companies that had promised to stop donations but have since resumed them, according to CREW.