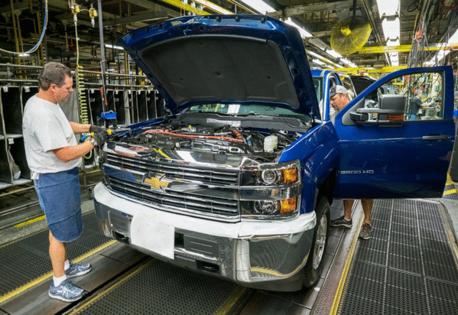 General Motors has done everything it can to protect production of its in-demand and highly profitable full-size pickups from the ongoing global shortage of semiconductor chips used in many car parts.

But now GM will be pausing most of its pickup production in North America.

In a notice to union members obtained by the Free Press, and confirmed by GM, the automaker will make the following production adjustments starting Monday:

•Flint Assembly, where GM builds the full-size heavy duty Chevrolet Silverado and GMC Sierra pickups, will operate on one shift for the week and is expected to resume regular production on Aug. 2.

•Fort Wayne Assembly in Indiana, where GM builds the full-size light-duty pickups, will be idled for the week, expected to resume regular production on Aug. 2.

•Silao Assembly in Mexico, which also builds full-size light-duty pickups, will idle for the week and is expected to resume regular production on Aug. 2.

"These most recent scheduling adjustments are being driven by temporary parts shortages caused by semiconductor supply constraints from international markets experiencing COVID-19-related restrictions," GM spokesman David Barnas said in a statement. "We expect it to be a near-term issue."

The news comes less than seven days after GM said it would have to idle four of its North American plants that build midsize SUVs — including Lansing Delta Township Assembly — starting July 19 and running for two weeks due to the chips shortage.

Additionally, at CAMI Assembly in Ontario, where GM builds the Equinox, GM will extend downtime to Aug. 16. CAMI was supposed to resume production next week following its scheduled two-week summer shutdown.

Since early this year the auto industry has had to either idle assembly plants or build vehicles shy of all the parts and then park them to await the arrival of chips. The result is comparatively empty dealer lots and a scramble to get as many vehicles built and shipped as possible when parts do arrive.

The head of the world's fourth-largest automaker on Wednesday acknowledged that public opinion in the wake of recent devastating floods in Europe and elsewhere is likely to push governments toward stricter regulations on ...Read More