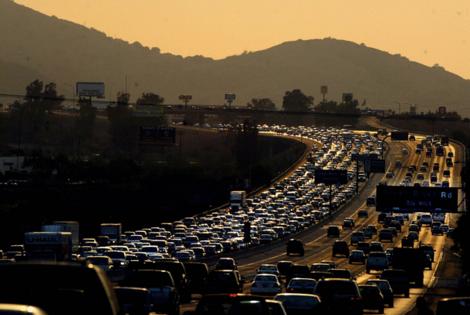 WASHINGTON — As debate continues on Capitol Hill over the shape of a multibillion-dollar infrastructure package, exactly how to pay for those investments remains vague. But one thing appears to be off the table for now: Asking America's drivers to help foot the bill.

Policymakers are running up against the reality that the main source of highway funding — fuel taxes — has long failed to generate enough revenue for needed infrastructure improvements, and that will only get worse as electric vehicles become a greater share of cars on the road.

The funding debate has put the problem in stark relief: electric vehicles are expected to take off and gas-powered cars will only get more efficient.

"Electric vehicles are what's going to kind of doom the gas tax in the long term, and of course, electric vehicles are chipping away at the system now," said Douglas Shinkle, transportation program director at the National Conference of State Legislatures. "In the short term, there's a lot of vehicles that get a lot better gas mileage than the vehicles that were on the roadways five or 10 years ago."

Some Republicans in Congress have suggested putting new federal taxes on electric vehicle drivers as a way to help make up the difference, including "user fees" such as a vehicle-miles traveled system in which motorists pay for how far they drive.

President Joe Biden and many congressional Democrats have resisted the call to increase user fees, arguing they would disproportionately affect low-income people and violate a campaign promise not to raise taxes on people who make less than $400,000. Instead, they've argued for raising the corporate income tax rate from 21% to 28% and other taxes on the ultra-wealthy, which Republicans oppose.

Biden and a bipartisan group of senators struck a deal late last month that avoids both of those potential funding options. Instead, they opted for a patchwork of solutions, including reductions in unemployment spending, public-private partnerships, extra COVID-relief money and more, which some experts have described as "pixie dust" and "wishful and fanciful."

While the funding issue is exacerbated by the advent of EVs, it's far from new.

Federal highway funding goes to construction and upkeep projects on the country's more than 1 million-mile highway system, which includes around 25% of all public roads in the U.S.