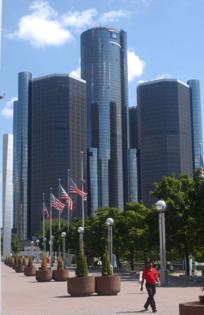 The union at the GM plant in Silao, Mexico, has been accused of vote tampering in a union election in violation of new local labor laws and the United States-Mexico-Canada Agreement (USMCA). The Mexican labor department said last month that the existing union had broken open ballot boxes and destroyed ballots voting against them.

The existing so-called "protection" union, the Confederation of Mexican Workers, also limited voting to 15 hours for more than 6,000 workers; hid the union contract from workers; refused to hand over ballots to labor officials; and threatened to fire employees if they didn't vote for them, Kildee, Rep. Bill Pascrell, D-New Jersey, and Rep. Earl Blumenauer, D-Oregon, wrote in the letter.

"As one of America’s most iconic companies, GM should be an active participant in respecting labor rights," the lawmakers wrote. "GM has a responsibility to speak out against violations of labor and human rights abuses at the Silao GM plant, and has an overarching responsibility to ensure that workers at its facilities throughout Mexico who exercise their rights in the workplace do so free from threats or retaliation."

The lawmakers asked GM to respond by May 25 to questions about the company's potential involvement in union violations, including whether the company pressured workers to vote for the existing union.

“General Motors respects and supports the rights of our employees to make a personal choice about union representation and any collective bargaining on their behalf. GM condemns violations of labor rights and actions to restrict collective bargaining," GM spokesperson Jeannine Ginivan said via email.

"We do not believe there was any GM involvement in the alleged violations or that any government-approved inspectors were denied access to the facility, and have retained a third-party firm to conduct an independent and thorough review. The company will cooperate with the U.S. Government and the Mexican Labor Ministry and other stakeholders to protect the integrity of the process.”

Mexico agreed to strengthen its labor laws under the USMCA, which went into effect last year and replaced the North American Free Trade Agreement, including a guarantee to secret-ballot votes on union contracts.

So-called "protection unions" and "protection contracts" have previously been common in Mexico, under which low-wage collective bargaining agreements are implemented without the input of workers and unions coordinate closely with employers.

The USMCA allows for complaints to be filed with U.S. officials if a facility is alleged to have broken the new labor laws, and outlines a mechanism for officials to enforce those labor laws. The first complaint under the new system was submitted Monday against an auto parts supplier in Mexico.

The lawmakers wrote in the letter that the allegations appear to violate the USMCA and "we expect the U.S. government to aggressively investigate and use all available remedies under the USMCA to effectively address violations and demonstrate publicly that labor rights will be protected."

Sam Dudley of Encino knows that California government has gone all in on zero-emission vehicles. So has he. He’s all about cutting back on greenhouse gases.

In May, Dudley splurged on a new electric car, a metallic ...Read More

Car buyers looking at Ford Motor Co.'s new electric vehicles might face greater challenges negotiating deals under a new pricing model — the latest in a string of examples of how EVs are changing the auto retail ...Read More

Phil Davie has been building hot rods for two decades in southeast Michigan, but last summer he turned his business on its head.

He started a new type of hot-rod business, one that removes a classic car's internal ...Read More