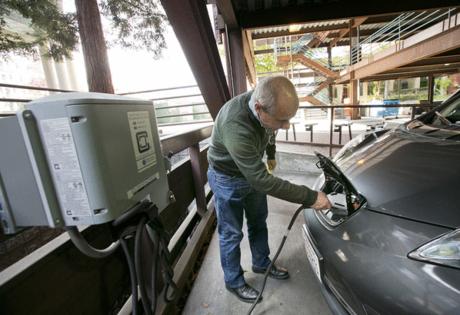 The renewed effort came the same day that a House subcommittee met to discuss the electric vehicle provisions of a climate bill that would seek dramatic emissions reductions, during which Republicans — including Michigan Rep. Fred Upton of Michigan — argued against tilting the market scales in favor of electric vehicles.

The contrasting priorities are a window into the coming battle in Congress as Democrats with razor-thin majorities attempt to pass legislation that would carry out President Joe Biden's priorities to spur transportation electrification.

Biden has promised to roll out half-a-million new public charging stations nationwide at the cost of at least $15 billion in federal investment. The bill, dubbed the EV Freedom Act, is what's needed to make "Biden's request a reality," Levin said.

"This network needs to be in place. Friends, we are not messing around," he told reporters Wednesday. "We are talking about something that's comprehensive, national, up to the scope of saving our planet from the way we've been frying it in the industrial revolution, and doing it in a way that's fully just."

There are just under 103,000 electric vehicle charging outlets in the country, according to the Department of Energy, and experts have estimated it will cost $50 billion to $60 billion to reach the president's goal. Industry analysts have also found that range anxiety — concern that they wouldn't be able to go longer distances in an EV — is one of the main barriers to people buying electric vehicles.

The bill directs the Departments of Transportation and Energy to create a plan to build a network of public electric vehicle charging stations placed far enough apart to allow drivers to go anywhere in the country without their battery running out.

The Department of Transportation would be able to set minimum charging speed requirements every two years based on the best available technology. Levin told The News the bill seeks to enable high-speed charging "as we look toward a future where you can charge your vehicle in the time it takes to fill up your gas tank."

Sam Dudley of Encino knows that California government has gone all in on zero-emission vehicles. So has he. He’s all about cutting back on greenhouse gases.

In May, Dudley splurged on a new electric car, a metallic ...Read More

Car buyers looking at Ford Motor Co.'s new electric vehicles might face greater challenges negotiating deals under a new pricing model — the latest in a string of examples of how EVs are changing the auto retail ...Read More

Phil Davie has been building hot rods for two decades in southeast Michigan, but last summer he turned his business on its head.

He started a new type of hot-rod business, one that removes a classic car's internal ...Read More