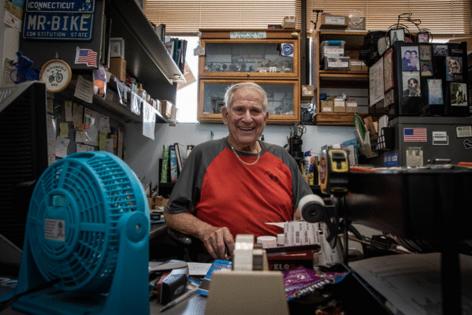 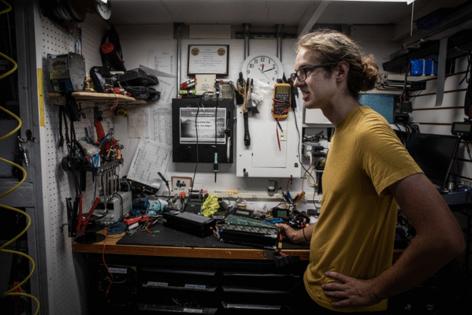 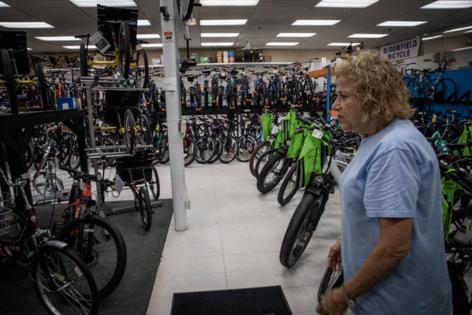 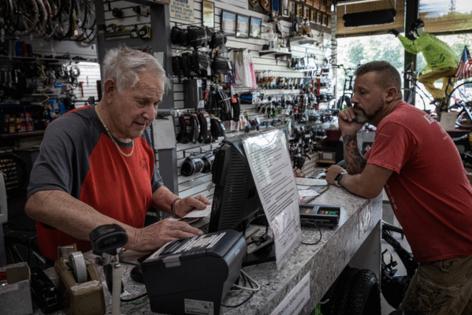 HARTFORD, Conn. Baby boomers who came of age with color TV, microcomputers and space exploration are driving the popularity of the latest innovation: electric bicycles that graying bikers can propel without much exertion.

Sales of traditional bicycles soared during the pandemic to fight stay-at-home boredom, but are now slowing. Electric bicycles, however, are enormously popular, providing a source of power other than human effort to move along trails and off-road.

“We’ve never seen anything as crazy as we’ve seen with electric bikes,” said Mike Wolf, owner of Bloomfield Bicycle & Repair Shop. “Electric bikes have absolutely taken over the market for the older generation.”

He has 100 to 130 e-bikes on display and sold five in just one day. Most customers are in their 50s and older and he said he recently sold two to a couple who are both 82.

Electric bicycles don’t have to be entirely effortless.

“People think if you have an electric bicycle you don’t have exercise,” Wolf said. “If you do it right, you pedal.”

Steve Long, a former Enfield resident now living in Tampa, Florida, is having replacement surgery on both knees and relies on his electric bicycle to get around.

“I could ride the bike all day,” said Long, 66. “The weight is off the knees. It gets you out and gets you active.”

Matt Majeski of Vista, California, who suffers from inflammation that hampers mobility, said an e-bike critic “mumbled that it was kind of cheating.”

“I do want to pedal as much as I can,” Majeski said. “If any part of my body gives out I can just use the throttle on it.”

Sales of electric bicycles have grown much faster than those for conventional bikes, but are a small percentage of the market, Dirk Sorenson, an analyst at The NPD Group, said in December. Sales of electric bikes were $741 million, with growth of 47% in the 12 months ending October 2021, compared with the same period in 2020.

Revenue for the U.S cycling market in the same period grew just 3% compared with the previous year, to more than $8.4 billion, according to NPD Retail Tracking data.

The single-digit growth “is a bit disappointing, but understandable” following a 45% increase between the 12 months ending October 2020 vs. 2019 that reflected strong consumer demand during the pandemic for outdoor activities, Sorenson said.

Now that “some of these needs are diminished” cycling sales could decline, he said. But growth due to strong sales of electric bicycles “should come as little surprise as these bicycles address the needs of an aging U.S. population, provide easy access to a family-friendly outdoor activity and address some of the need for commuting in denser population centers,” he said.

Drawn to a growing industry, European car manufacturers BMW and Porsche are in the e-bike market. Porsche last month bought a manufacturer of light and compact drive systems for e-bikes.

And Rivian, a manufacturer of electric cars, has hired the former chief technology officer at Specialized Bicycle Components, fueling speculation about its plans for the e-bike industry.

Bob Kiernan, owner of Manchester Cycle Shop, said e-bikes sell for between $1,500 and $10,000. A battery that can be recharged overnight has a 50-mile range. Still, bicyclists can pedal “and get some exercise,” he said.

“As we sell more our customers become our best salespeople,” Kiernan said

Electric bicycles reach younger riders in addition to baby boomers. Mark Reynolds, 43, said his $4,000 e-bikes that he bought online from a firm in Saskatchewan, Canada, gets him around “pretty hilly” Stafford Springs. He said he rides at 15 mph to 20 mph on flat land.

It gives him an opportunity to ride with his 8-year-old daughter. “I had a hard time keeping up with her,” he said.

Kent Nelson of Orlando, Florida, who pulls his 2-year-old son in tow in a trailer, said cyclists may experience “range anxiety” because they’ll run low on power at 20 miles.

“Pedaling a bike sounds dreadful,” he said. “An e-bike is going to get me somewhere. That’s great.”

Legend holds that fairy doors are magical portals and, while humans can’t travel into this realm, they can at least find the tiny doors if they know where to look.

That place is Dublin, Ohio, home to the very first ...Read More

That makes her one of millions of Californians who don’t make enough to ...Read More