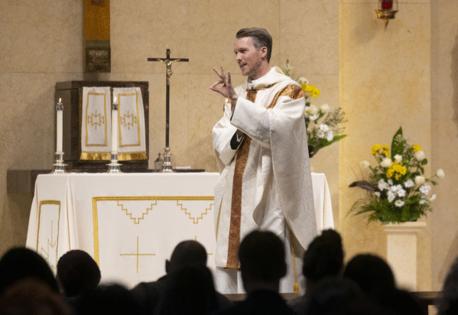 The Rev. Andrew Brinkman has started alternating how he celebrates Mass at Our Lady of Guadalupe, the St. Paul Catholic church where parishioners are so divided over changes that some held a public protest late last year.

It's an olive branch of sorts to the longtime parishioners who said Brinkman's traditional practices — facing the altar, including Latin chants and encouraging women to wear veils during Mass — left them feeling unwelcome at Minnesota's first Mexican parish.

These parishioners also clashed with Brinkman, who joined the church six years ago and became pastor in 2018, over holding Aztec dancing and scholarship ceremonies in the worship space and including personal eulogies in funeral Masses.

Many of the young immigrant families who have joined Our Lady more recently, however, said they are inspired and energized by Brinkman's traditionalist approach.

"My culture? I'm proud to be Mexican," said Gloria Moreno during a listening session with Archbishop Bernard Hebdaabout the parish's divide. "But here in a church I come to learn about my faith."

The heated debate at Our Lady is unique, driven by complicated generational and cultural factors. But it's part of a growing polarization about what it means to be Catholic.

Catholic congregations across the Twin Cities are confronting increasingly differing views about the Latin Mass, whether a worship space should be used for community events and even wearing masks and getting COVID-19 vaccines. Several churches have also struggled with dissension in their congregations after a change in priests.

The discord is driven in part by a generational shift, said Massimo Faggioli, a former theology professor at the University of St. Thomas who now teaches at Pennsylvania's Villanova University.

"The fact that younger priests tend to be more traditional or more conservative than the ones who are now 60 or 70 is a global trend. In the United States, it's much more extreme," said Faggioli. "It is very hard to imagine what will happen to liberal Catholicism in this country, because it's not producing a new generation of clergy that can sustain it."