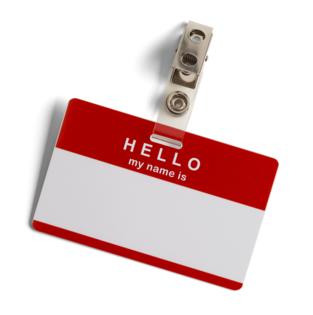 For reasons beyond the scope of this article, in many cultures one marriage partner may adopt the surname of the other. In other situations, one may move the family name to a middle name, or may hyphenate both last names, or some other modification. The first name of some folks may come from a surname from their heritage, and so forth.

The research of family names also goes back to the earliest times — trying to determine one’s breeding or inheritance (“roots”). For example, consider the genealogy of Jesus (the “begats”) described in Matthew 1. Ancestry searches, whether in written accounts, photos, microfilm or genetic/DNA studies, are growing ever more popular.

Names can give a sense of belonging.

The act of naming has been around since nearly Day One (Genesis 2:19). Naming helps to define, to distinguish, to set apart one thing from another. Naming gives to the author a measure or sense of control over the person, thing or circumstance being named. That control may be for good (honor, respect) or for ill (disparaging nicknames). Jesus demonstrated a power play of sorts by demanding the name of his foe (Mark 5:9).

“Naming rights” have influenced families, societies and cultures. Those rights may be by inheritance (House of Windsor), discovery (Alzheimer’s disease), or purchase (Rockefeller Plaza).

Naming may convey a sense of power or permanence.

Medically speaking, having the correct name or diagnosis of an afflicting disease allows a plan of action to be developed and implemented (“Tell me what I have, Doc, so I know how to fight it!”). Having no diagnostic name or the wrong one prohibits or misdirects an action plan. In general, unnamed opposition denies the opportunity for engagement.

The name is important.