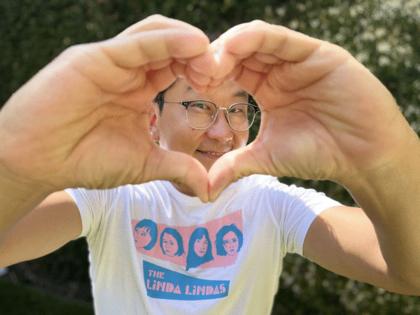 He walks his followers through a back-to-school shopping trip and wonders if they should buy "anime backpacks." He does a finger heart as he cooks Korean ramen for two in stone pots with slices of cheese.

But lately, he has also been serving as a counselor of sorts. He described what it's like to be "in a deep pit of sad" following last year's mass shooting in the Atlanta area in which eight people, including six women of Asian descent, were killed. He has helped people cope with loneliness — equating it with hunger.

For Father's Day this year, he talked about what it means to have a complicated relationship with one's dad.

"I see you're suffering. I know that with all the stuff people are going through, you don't always feel like it's important. It's just your thing to endure," Cho, sitting in front of his backyard, told his followers. "But I want you to hear that it's not just your thing. Your pain is important because you're important."

Cho, a 48-year-old who came to the United States from Korea in 1975 as a baby and initially found fame through his coffee business, did not expect to open "the Pandora's box," as he called it, spending hours reading and responding to people messaging him about their concerns. But Cho has been a part of a growing movement of Korean Americans openly talking about their mental health, breaking the long-held stigma in the community.

Buoyed by everything from BTS to Zoom therapy and nudged by the stress of the pandemic, Korean Americans are seeking more mental health help than ever before, with one Koreatown clinic seeing its number of clients nearly double over the last four years.

The skyrocketing need, along with the continuing scarcity of therapists competent in Korean language and knowledgeable in Korean culture, has strained the community's ability to get mental health care. Still, community organizations and experts are optimistic that this shift in attitude about mental health will last.

"People don't know they need help. They don't know that they are drowning.... They think it's their lives," said Katherine Yeom, the executive director of Korean American Family Services in Koreatown. But the last few years, accentuated by the pandemic, made them "realize that maybe they do need to get help."

Koreans have long had a euphemism for seeking therapy or getting mental health care: going to a "white house" on a hill. Going to therapy, Yeom said, has long been associated with "people locked up in white clothes."

When Jerry Bilinski, a 67-year-old retired social worker, scheduled cataract surgery with Carolina Eye Associates near his home in Fayetteville, North Carolina, he expected no drama, just a future with better vision.

A strong immune system is the foundation of good health, warding off infections and allowing you to bounce back more quickly if you do get sick. Although there is no one food or supplement that has been scientifically ...Read More

Some people may be cautious when it comes to using oils in cooking or with their food. Eating fat with meals conjures thoughts of high cholesterol and, well, getting fat. The fact that some fats are labeled as “bad” ...Read More

DEAR MAYO CLINIC: I threw out my back doing yardwork. While I was laid up for a few weeks, I’m OK now. I’m concerned I will reinjure my back shoveling snow this winter. How can I protect my back while shoveling?

Eisai Co. unveiled much-anticipated findings on its experimental Alzheimer’s drug, providing tinder for the hot debate over whether its modest efficacy is worth potential risks that include serious brain bleeding.