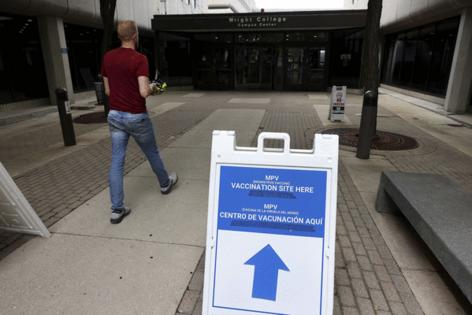 In 2019, Columbus, Ohio, had seven reported cases of congenital syphilis, or cases in which a newborn child was infected during pregnancy. Two years later, that number rose to 20. And now?

“Year to date, we’ve already seen 28 cases,” said Dr. Mysheika Roberts, the city’s health commissioner. One of this year’s cases, she added, resulted in the death of a child.

Cases of congenital syphilis in the United States climbed by a whopping 184% between 2017 and 2021, according to the federal Centers for Disease Control and Prevention. But that’s only one element of an explosive rise in sexually transmitted infections, known as STIs, which one expert in the field describes as an “out-of-control pandemic” that began in the 2010s and became super-charged during the COVID-19 pandemic.

Experts in public health say COVID-19 contributed to the rise in sexually transmitted infections by preventing people from getting routine health care, where STI screenings can occur. It also siphoned public health workers from STI work to focus on COVID-19.

With COVID-19 still festering, a battered and underfunded public health workforce also is tasked with trying to turn the tide on the rising numbers of STI cases, now including monkeypox, which also is mostly spread during sexual contact.

“These are shocking numbers,” said David Harvey, executive director of the National Coalition of STD (Sexually Transmitted Disease) Directors, who characterized the situation as “out of control.” (Harvey says, despite his organization’s name, it prefers the term STI as less stigmatizing.)

According to preliminary numbers from the CDC, the overall number of syphilis cases, which includes congenital syphilis and syphilis transmitted through sexual contact, rose nearly 70% between 2017 and 2021. It increased by nearly 28% in 2021 alone, the second year of the COVID-19 pandemic.

The increase in congenital syphilis has been even steeper than for syphilis transmitted through sexual contact, 184.5% over five years and 24.1% between 2020 and 2021. In 2020, the last year for which the CDC has data, there were 149 stillbirths or infant deaths associated with congenital syphilis, more than triple the number from four years earlier.

“You can argue that every case is one that can be prevented,” Leandro Mena, director of the CDC’s Division of STD Prevention, said in an interview with Stateline. They represent “a failure in our system,” he added. (Forty-two states and Washington, D.C., require at least one syphilis screening during pregnancy, although that occurs only if the patient is receiving prenatal care.)

Silvia Garcia’s 14-year-old son was left permanently disabled and in a wheelchair after a community health center doctor in New Mexico failed to diagnose his appendicitis despite his complaint of severe stomach pain. The...Read More

COPD, or chronic obstructive pulmonary disease, is a leading cause of disability and death in the U.S., according to the American Lung Association. More than 12.5 million people have been diagnosed with COPD, but millions ...Read More

Heart disease remains a leading cause of death around the world. And diabetes is one of the risk factors for heart disease. Diabetes is a growing global health concern, with more than 422 million people living with this ...Read More

DEAR MAYO CLINIC: I am in my early 50s and enjoy an active lifestyle. I recently heard reports of an increase in ankle sprains and broken ankles particularly in an older population, due in part to both activity and aging. ...Read More

DEAR MAYO CLINIC: My husband has had terrible neck pain for a few years. It has gotten to the point where he cannot turn his head to either side enough to drive safely. We heard that replacing a disk in his neck might be ...Read More