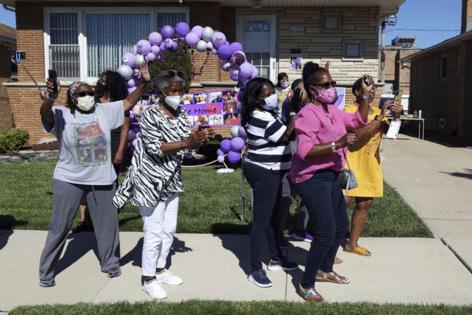 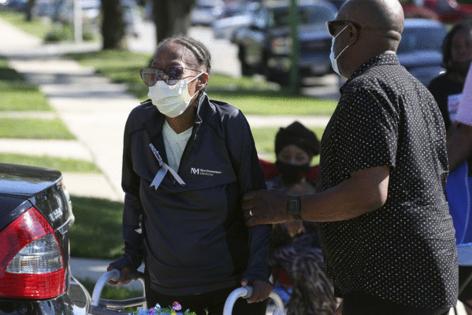 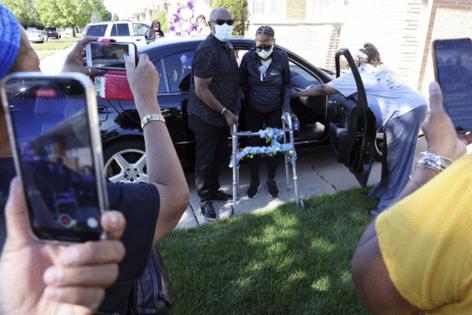 CHICAGO -- It was 422 days at Northwestern Memorial Hospital.

That’s the length of Chicago resident Colette Hurd’s stay due to her idiopathic pulmonary arterial hypertension, a condition that affects blood vessels in the lungs and the right side of the heart and causes the heart and lungs to weaken over time.

“I didn’t even realize that something was wrong because I didn’t know the symptoms,” said Hurd, 57. “I just noticed that my stomach was collecting fluid and it looked like I was about eight months pregnant.

According to Northwestern Medicine lung transplant pulmonologist Dr. Ambalavanan Arunachalam, Hurd has a rare condition where the high blood pressure in her lungs restricted her heart to the extent that it could not pump blood properly and caused a lack of blood flow to other organs, including her kidneys.

Hurd was admitted to the hospital at the height of the pandemic in May 2020 with failing lungs. By July 2021, she was on a list for a double lung and kidney transplant, but her 5-foot-1-inch stature made finding a match difficult. As did Hurd having highly sensitized blood, with antibodies from previous blood transfusions that would interfere with her body accepting new organs.

Hurd said she got a call four times that a donor was found, calls that didn’t reach fruition due to complications with organs having a blood clot, pneumonia or nonmatching tissues.

“She was in the ICU for close to a year and she had several times where she almost died with the amount of medications that we had to keep her alive,” Arunachalam said. “She was on a continuous drip to support her blood pressure for months and months and she was also on daily dialysis to do the work for the kidneys.”

It was a fifth call that proved successful. On May 15, Hurd accepted organs that were not the right match for her with a protocol created by her transplant team to get rid of the antibodies in her bloodstream to make her a good match for new lungs and a kidney.

“She was not able to get any organs out there,” said Dr. Satish Nadig, director of Northwestern’s Comprehensive Transplant Center, an abdominal transplant surgeon and the chief of organ transplantation in the Department of Surgery at Northwestern University Feinberg School of Medicine. “So we did many immunologic maneuvers ... via medications and filtering off antibodies of the patient to reduce their memory response so that they can get a window to accept an organ. We weren’t able to get her completely desensitized, but we ended up taking lungs and kidneys of a positive crossmatch (a donor and recipient who are not compatible) and transplanted them into her and continued those protocols postoperatively.”

The augmented immunosuppression was a high-risk procedure, but it worked and after a six-hour surgery, Hurd is on the mend.

Is there anyone who isn’t aware of breast cancer?

Since 1985, cancer-related nonprofits, along with pharmaceutical firms and other businesses, have sponsored an international campaign to observe October as “...Read More

COVID-19 has rightfully dominated infectious disease news since 2020. However, that doesn’t mean other infectious diseases took a break. In fact, U.S. rates of infection by gonorrhea have risen during the pandemic....Read More

KANSAS CITY, Mo. — In April, Kenny Caldwell walked into a Costco pharmacy in Kansas City to pick up their monthly medication. They walked out empty-handed.

“The pharmacist was like, well, we’re not willing to take ...Read More

Chili peppers turn up the heat and the health benefits of many cuisines around the globe.

The chili pepper was named “pepper” by Christopher Columbus on a Caribbean exploration when he assumed, based on ...Read More

A new scientific report supports research suggesting that even low levels of pollution — well below the current national regulatory cutoffs — may harm our health.

DEAR MAYO CLINIC: I just turned 65 and had my annual physical. This year, my doctor recommended that I receive a high-dose flu vaccine. Why do I need a high-dose vaccine?

ANSWER: Influenza is a viral infection that ...Read More