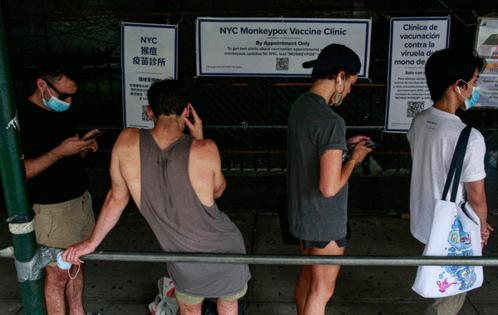 As gay men working in medicine, watching the monkeypox virus spread through our community has been devastating.

On July 23 the World Health Organization declared monkeypox a global health emergency. But in New York we’ve been seeing the outbreak’s effects for weeks.

Monkeypox is not a novel virus. The infection, which can cause fever, headaches, body aches, fatigue and a painful rash across the body, already has government-approved vaccine and treatment as well as an established lab test. The national scientific community couldn’t have been more primed for a monkeypox outbreak. The U.S. contained an outbreak in 2003 and experts have warned of a potential epidemic for more than a decade.

Yet despite our resources and medical knowledge, U.S. case numbers are multiplying rapidly — going from one case reported in May to more than 2,000 in two months and now approaching 4,000 known cases. Data published this week shows the U.S. leading the world in reported cases. (The current strain has caused no known deaths in the U.S. and its fatality rate has been estimated at 1% or less.)

So how did we get here? The answer is simple: Viruses spread fastest among the most marginalized, underserved and under-resourced individuals. Our public health interventions often fail to reach these people, further worsening health care disparities and stigma — and enabling larger outbreaks.

It’s no accident that this virus receiving a weak public health response is one that mostly affects men who have sex with men, many of whom self-identify as gay, bisexual and transgender. In fact, WHO advisers declined to declare a monkeypox emergency in June in part because the disease has not moved out of this primary risk group. With cases rising, WHO Director-General Tedros Adhanom Ghebreyesus overruled advisers to make the declaration.

To be clear, nothing about LGBTQ individuals makes them more biologically susceptible to monkeypox. The current outbreak is primarily transmitting via close physical and sexual contact, though it can also spread through respiratory secretions and touching infected materials (such as clothing and linens). The reason this virus continues unchecked among men who have sex with men is that public health authorities have been slow to treat the risk to these individuals as an emergency.

To end monkeypox, we must confront the discrimination in the medical and public health systems that has enabled this preventable crisis. Clearly, having a vaccine for monkeypox is not enough in the face of homophobia that hampers public health response. And the steps it will take to end monkeypox will also enhance access to the comprehensive and patient-centered primary care that largely does not reach LGBTQ individuals.

Step one is better public health messaging. Officials have balked at focusing a range of prevention efforts among gay and queer men because they fear any discussion of gay sex will be seen as homophobic and counterproductive. Messaging should embrace harm reduction approaches and communicate ways that individuals can avoid infection amid a vaccine shortage, such as taking steps for safer sexual activity.

The other key step is not repeating the failures of the early response exemplified by New York City’s initial monkeypox vaccination campaign. Without advance notice, the city initially rolled out vaccines by advertising on the public health department’s social media accounts, reaching a select crowd in English only. The vaccines were offered on a first-come, first-served basis at a single clinic in Chelsea, a predominantly white, affluent Manhattan neighborhood. Yet data shows that a disproportionately high number of cases of monkeypox are among nonwhite individuals, with two of five cases occurring outside of Manhattan.

New York’s public health department has since improved vaccine access for at-risk people, including by opening mass vaccination sites in other boroughs and expanding appointment times beyond the standard workday. But New Yorkers who did not get the vaccine in time and contracted monkeypox have described encountering an expensive labyrinth to receive care, indicating continued obstacles in health systems.

These problems could have been — and still could be — minimized by investing resources in community health centers including LGBTQ-focused ones and safety net clinics to lead the response. With decades of experience serving vulnerable communities and protecting their privacy, these centers are most likely to reach those at risk for monkeypox. By prioritizing these organizations for vaccine supply and treatment funding, we can strengthen primary care facilities rather than creating pop-up clinics that address only the vaccination aspect of this crisis.

Vaccine sites can distribute other public health tools such as condoms, lubricant, hand sanitizer, masks, fentanyl test strips and Narcan kits to reverse opioid overdose. At the same time, other vaccines recommended particularly for men who have sex with men — meningitis, hepatitis B and HPV — should be made available.

To focus solely on monkeypox prevention through mass vaccination misses a larger opportunity to confront the health care disparities and systemic prejudices that let this disease become a global emergency.