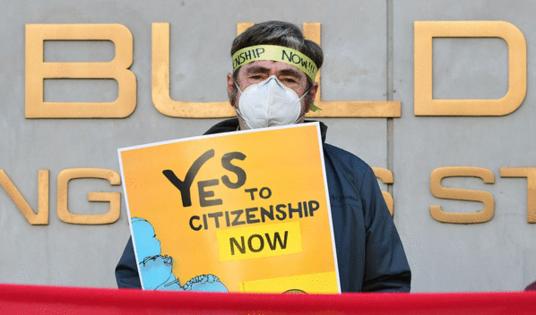 The program’s launch, starting no later than Jan. 1, 2024, is expected to provide full coverage for approximately 700,000 undocumented residents ages 26-49 and lead to the largest drop in the rate of uninsured Californians in a decade.

The MediCal expansion is expected to cost $2.6 billion annually.

Californians generally are eligible for Medi-Cal coverage based on their income. The income cap for a family of four this year is $36,156.

California also opens Medi-Cal eligibility to people with certain medical conditions. It’s available to people who are pregnant, blind, disabled, under age 21, living in a nursing home or are a recently settled refugee.

Opening up Medi-Cal to all undocumented Californians has been a goal for health and immigration advocates for years.

“This budget investment reflects California’s values of inclusion and fairness and should be a model for the rest of the nation,” said Sarah Dar, director of Health and Public Benefits Policy at the California Immigrant Policy Center. “All Californians, regardless of their age or where they were born, should have access to basic necessities like food and fair, steady wages.”

Undocumented residents remain the largest group of uninsured in California, according to a recent analysis from the Center for Labor Research and Education at the University of California, Berkeley.

A disparity and “historic wrong” that will be fixed with the expansion, said Assemblyman Miguel Santiago, D-Los Angeles.

“This is a game changer,” said Santiago. “It’s one of the most important pieces of legislation that’s gonna go through this house because the ability to give health care means the ability to live life without pain.”