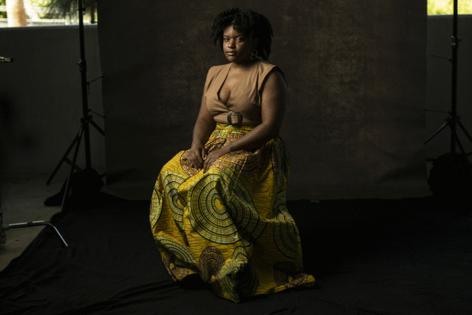 That's where you'll find Straight Up Fast Food and its menu of organic smoothies and cold-pressed juices every day from 8 a.m. to 6 p.m. Once you've selected your drink (the Jefferson, filled with blackberries, açaí, apples and more, will never let you down), just shoot the page a message with your choice and your location.

Instantly, it'll reach owner and founder Senter McGinest IV, who's likely in the back of 5-Star Kitchen along Vernon Avenue blending a batch of produce for the next customer in line. As soon as your potion is ready, he'll hop on his motorcycle, wheeling it to your door faster than you can say the word "Big Mac."

McGinest has always been a hustler, ever since the days he was selling candy as an elementary schooler. Years later, he's traded in the high fructose corn syrup for organic fruits and vegetables, creating his own brand while simultaneously expanding access to healthy food in South L.A.

He's taken his motorcycle as far as Sherman Oaks, South Gate and Pasadena to drop off his blended drinks (never once charging a delivery fee, no matter the distance). Still, most of his customers are in South L.A., where access to healthy food has historically been abysmal.

"In the neighborhood, fast food is forced upon us," he said. "It's imprinted into us psychologically. So I was like, let's change the meaning of that."

The stats are everywhere. According to a 2018 Los Angeles County health survey, the obesity rate in South L.A. was 37% compared to 28% in all of L.A. County. The concentration of fast-food restaurants grew so bad that in 2012, the city of L.A. attempted to ban new ones from setting up shop — although loopholes in the law meant it wasn't nearly as effective as anticipated.

For McGinest, though, healthy eating habits are all he knows. His father was the bodybuilder type, cutting red meat and junk food out of his son's diet at an early age. Senter McGinest took it to the next level as he grew older, becoming vegan for about five years (although he eventually backed off).

While building a platform as a skateboarder, he started thinking of ways to use his influence to help people eat better, after becoming inspired to focus on food justice while working for the nonprofit Community Services Unlimited. He started posting photos of his smoothies on Instagram, and before long the DMs asking "what's in that?" started rolling in.

A switch flipped in his brain.