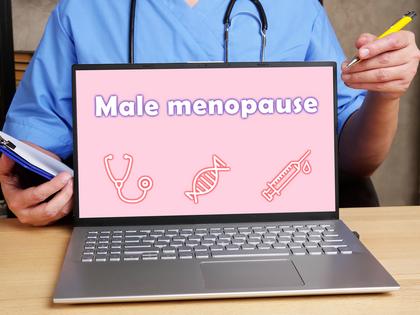 DEAR MAYO CLINIC: My wife is 52 and just beginning menopause. We were talking about the changes she’s been experiencing, and I was wondering if there is such a thing as male menopause. I am 58.

ANSWER: Hormone changes are a natural part of aging. Unlike the more dramatic reproductive hormone plunge that occurs in women during menopause, however, sex hormone changes in men occur gradually.

The term “male menopause” has been used to describe decreasing testosterone levels related to aging. But aging-related hormone changes in women and men are different.

In women, ovulation ends and hormone production plummets during a relatively short period of time. This is known as menopause. In men, production of testosterone and other hormones declines over a period of many years, and the consequences aren’t necessarily clear. This gradual decline of testosterone levels is called late-onset hypogonadism, or age-related low testosterone.

Testosterone levels can be checked by a blood test, but tests aren’t routinely done. That said, if you are experiencing certain signs and symptoms suggestive of low testosterone, it may be worthwhile to ask your health care provider to check your levels.

Some signs and symptoms suggestive of low testosterone include:

Experts recommend only testing older men for low testosterone if they have signs or symptoms. If an initial test shows low testosterone, the test should be repeated to confirm the results. If low testosterone is confirmed, further testing of the pituitary gland is recommended to determine the cause and rule out other hormone deficiencies. The pituitary is a gland the size of a kidney bean situated at the base of your brain. It is part of your body’s endocrine system, which consists of all the glands that produce and regulate hormones.